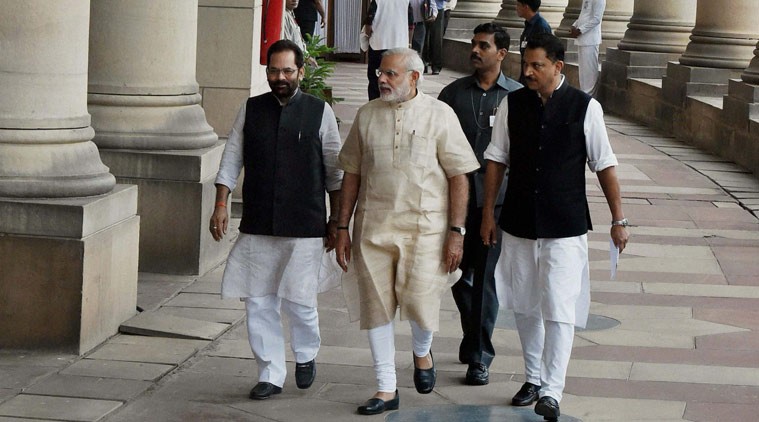 Debate on Presidential address to Parliament in the Lok Sabha turned into a ‘self-analysis’ by the ruling and the Opposition benches.

The BJP’s Odisha mascot and Union Minister of State Pratap Chandra Sarangi weaved a spell of nationalism laced with lavish praise of Prime Minister Narendra Modi for the “pro-incumbency” mandate.

On the other hand, Congress leader in the House Adhir Ranjan Chowdhury dubbed Modi as an “excellent salesman” and argued that his party couldn’t market itself well (connect with the people) despite the NDA government’s failures.

Sticking to its larger strategy of eastern thrust — particularly in West Bengal and Odisha — the BJP propped up Sarangi to initiate the debate in the House.

Sarangi richly quoted from the Upanishads, the Gita and the Ramayan, besides Odia literature, Nobel laureate Rabindra Nath Tagore and Swami Vivekanand to set a nationalistic narrative during his hour-long speech, amid cheering by the treasury benches and jeering by Congress and Trinamool MPs intermittently.

Asking the Opposition to “apologise” to Modi for running a personalised negative poll campaign, Sarangi claimed that criticising the PM was akin to one hitting his head against the mighty Himalaya.

“Those who live in the country will have to say Vande Mataram,” asserted Sarangi.

“The tukde, tukde gang and their supporters cannot have places in the country.”

The Congress also attributed the saffron party's win in the general elections to Modi being a "very big salesman".

Chowdhury took a swipe at Sarangi for his excessive praises of the PM comparing him with Swami Vivekanand.

Hitting out at the NDA for running a “false propaganda” during elections, the Congress leader said if Sonia Gandhi and Rahul Gandhi had indeed been involved in irregularities, why weren’t they in jail instead of sitting in the House.

The Congress leader in Lok Sabha later clarified outside the House that he did not mean the comment and blamed it on his poor Hindi.

Chowdhury also criticised Sarangi for showering "excessive" praise for Modi, prompting Parliamentary Affairs Minister Pralhad Joshi and many other BJP leaders to refer to "India is Indira and Indira is India" comment made by the then Congress president for former prime minister Indira Gandhi.

"We have not gone to this extent," Joshi quipped, promoting Chowdhury to liken Indira Gandhi to "Ma Ganga" and Modi to a now-expunged term.

The Congress leader said the BJP returned to power as Modi was a "very big salesman" and a "better salesman" while the Congress failed to market its products in the 2019 Lok Sabha polls.

Hitting back at the BJP after Sarangi referred to alleged scams in the sale of 2G spectrum and coal block allocations, he said if there was a wrongdoing why are UPA chairperson Sonia Gandhi and Congress president Rahul Gandhi not in jail.

"Why are they still in Parliament", he asked.

In his speech, Sarangi said the Congress gave India an "accidental prime minister", a reference to Manmohan Singh, and praised Modi for his strong leadership that ended "policy paralysis", "enhanced" global respect for India, targeted terrorists based in Pakistan and took welfare measures to the poor.

He said the Congress made the BJP realise the importance of strong leadership as policy paralysis was a "new norm" during the ten-year rule of the party with the "accidental prime minister" at the helm.

He said he is grateful to Narendra Modi for making a man like him, who hails from a humble background, a minister.

Taking on the Congress, Sarangi said ten years of the Congress-led UPA government was that of "misrule" and "full of corruption".

Emphasising that both Modi and his government are committed to the welfare of the poor and downtrodden, the minister said by 2022 every poor person will have a "pucca" house with toilet.

"Our goal is to make India a great nation," the BJP MP said.

Sarangi also pointed out that Modi has received many international awards.

"We will give the honest government and if you will not help us then people of India will not forgive you," he told the opposition members.

Chowdhury accused the government of "political plagiarism" syndrome, saying it claims achievements for everything and ignores the foundation laid down by the Congress.

Invoking former Prime Ministers Jawaharlal Nehru, Indira Gandhi and Rajiv Gandhi, Chowdhury in his one-and-a-half hour long speech listed out the achievements under the Congress Government and accused the BJP of just renaming 19 of the 23 schemes of the Congress party.

"This Government has developed a new syndrome called political plagiarism. Congress party has been contributing to growth (since Independence), but one morning you suddenly say Congress has done nothing and you are doing all development work. It is nothing but travesty of truth".

"You are a government which can be called compliment-addicted government driven by manipulation," said Chowdhury who was the first speaker from the Opposition to initiate discussion on the Motion of Thanks.

Saugata Roy of the TMC reiterated his party's stand against use of EVMs in elections and demanded that the Election Commission revert to the use of ballot papers.

Congress leader Sonia Gandhi was seen prompting Chowdhury while he was attacking the BJP in his speech.

Both Modi and Home Minister Amit Shah were also present in the House.

Stating it was the Congress party which initiated major initiatives like 'Green Revolution', 'White Revolution' and 'Technology Revolution' in the country, and increased GDP growth, Chowdhury said it was also under the Congress that host of CPSEs like ONGC, IOC, NTPC, SBI and HAL were set up.

"Congress is the soul of the nation. Congress is synonymous with India. For us, the country is ahead of the party. Although we have 52 members in the House, we will continue to fight for the common man," he said.

He said the BJP did not mention Nehru's name in the Presidents address even once and that it does not show Sabka Sath Sabka Vikas attitude of the Government.

Crediting Congress for a slew of government schemes and initiatives like NREGA, RTI, Right to Education and Food Security Act, Chowdhury said, "you talk about hitting back at Pakistan with missiles. These missiles were built during the Congress tenure."

Targeting the Modi government, Chowdhury said the country is reeling under drought, but the government is not worried.

He said BJP MPs did not take steps to alleviate miseries of the people as they think Modi will do everything.

"They think that praising Modi is sufficient, he will help them sail through (Modi baba paar lagayenge)," he said.

SP leader Azam Khan attacked the BJP over its Hindutva politics, saying Muslims had a choice to go to Pakistan during partition and "our forefathers decided to stay here".

"You (BJP) never had this choice. But it hurts when we are forced to recite Vande Mataram," he said.

He also termed the 'triple talaq' bill as "unacceptable".