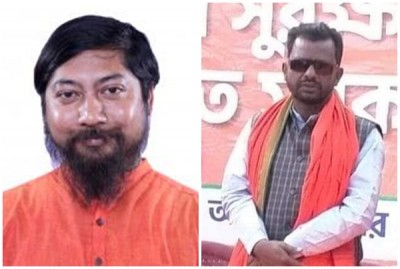 Kolkata,  BJP leader Suvendu Adhikaris narrow win over West Bengal Chief Minister Mamata Banerjee in the battle of prestige in Nandigram was one of the major talking points of the Bengal Assembly polls after the results were announced on May 2.

While the victory of Adhikari, the one-time close aide of Banerjee, by a slender margin of 1,956 votes caused a lot of hue and cry, there were 11 other candidates -- 8 from the BJP and 3 from the Trinamool -- who managed to win by the skin of their teeth by margins even lower than Adhikari's.

The closest contest was witnessed in Dinhata in Cooch Behar district where BJP's Nisith Pramanik piped his Trinamool rival Udayan Guha by a wafer-thin margin of 57 votes. While Pramanik got 1,16,035 votes, Guha's tally halted at 1,15,978.

Pramanik, who had switched from the Trinamool to the saffron camp, had also won in the 2019 Lok Sabha elections on a BJP ticket from the Cooch Behar Parliamentary constituency. Guha, on the other hand, is one of the most popular leaders in the district and had won from Dinhata by a margin of 21,793 votes in 2016.

In the Balarampur constituency in Purulia district, Baneshwar Mahato of the BJP won by margin of just 423 votes. While Mahato got 89,521 votes, his Trinamool rival Shantiram Mahato managed 89,098 votes.

BJP candidate from Ghatal in East Midnapore, Sital Kapat, edged past Trinamool's Shankar Dolai by a slender margin of 966 votes. Kapat got 105,812 votes against Dolai's 104,846 votes.

There are three BJP candidates who missed the train to the state Assembly by a whisker.

Trinamool candidate from Dantan in West Midnapore district, Bikram Chandra Pradhan, dwarfed his nearest candidate Shaktipada Nayek of the BJP by a margin of 623 votes. While Pradhan got 94,609 votes, Nayek could manage 93,834 votes.

The Trinamool candidate from Jalpaiguri, Pradip Kumar Barma, defeated his BJP rival Soujit Singha by a margin of only 941 votes. Barma secured 95,668 against Singha's 94,727.

Another Trinamool candidate from Tamluk in East Midnapore also went past his BJP rival by a thin margin of 793 votes. While former Trinamool minister Soumen Mahapatra got 1,08,243 votes, his BJP rival Krishan Bera's tally stopped at 1,07,450.

Another BJP candidate from Gazole, Chinmoy Deb Barman, got the better of his Trinamool rival Basanti Barman by a margin of 1,798 votes. Chinmoy Barman got 1,00,655 votes against Basanti Barman's 98,857 votes.

Similarly, BJP candidate from Bankura, Niladri Sekhar Dana, scraped past Trinamool's Sayantika Mukherjee by a margin of 1,468 votes, while Budhrai Tudu of the BJP defeated his Trinamool rival Kalpana Kisku by 1,650 votes in Tapan in Dakhsin Dinajpur district.