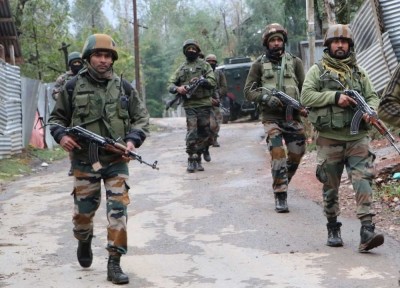 Srinagar,   A terror module of proscribed terror outfit LeT was busted in Jammu and Kashmir's Bandipora with the arrest of seven terrorists/terrorist associates, including a woman, police said on Monday.

"During the course of investigation of cases regarding the recent Bandipora encounters, Bandipora police, along with other security forces, busted a terror module of proscribed terror outfit LeT by arresting an active Pakistan-trained terrorist, two hybrid terrorists and four terrorist associates," a police official said.

The Pakistan-trained terrorist has been identified as Arif Ajaz Shehri, son of Ajaz Ahmad alias Anfall, resident of Nadihal, who had gone to Pakistan on a valid visa in 2018 through Wagah Border and infiltrated back to this side after obtaining illegal arms training and started actively working with proscribed terror outfit LeT in Bandipora.

The two hybrid terrorists have been identified as Ajaz Ahmad Reshi, resident of Rampora, and Shariq Ahmad Lone, resident of Gundpora. They were tasked with carrying out attacks on police/security forces and other soft targets, particularly in Bandipora district."

Arms and ammunition, including two pistols, three pistol magazines, 25 pistol rounds, and three hand grenades, were recovered from their possession. Besides, an Ecco Van bearing registration number JK15A-1528 which was being used in ferrying of terrorists from Bandipora to Nowgam, Pantha Chowk and Srinagar was also seized.

Moreover, three two-wheelers, which were being used for doing reccee of police, security establishments, monitor movement of security forces, and ferry terrorists in Bandipora area, were also seized. Similarly, a Maruti-800 Car and a Pulsar bike were also seized.

Cases under the relevant sections of law have been registered and further investigation is going on.