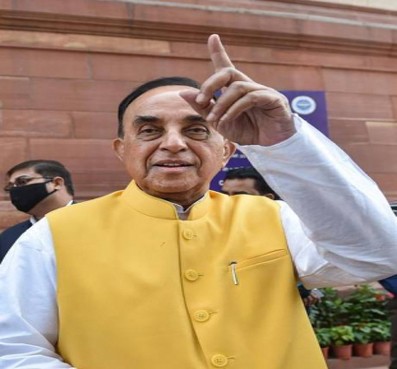 Speaking exclusively with IANS, Swamy said that a jail term is certain for both Sonia Gandhi and Rahul Gandhi on charges of money laundering in connection with the National Herald case.

Delving on a wide range of issues, Swamy talked about Ram Setu, and expressed concerns over the country's current economic condition, among others.

Here are excerpts from the interview:

Q: The National Herald case has created quite a stir in the nation's political circles. You were the one to raise the issue first. What's the matter all about and how did it violate the law?

A: I raised the issue for the first time in 2012 at a press conference, and later went to the court in this connection in 2013. The Gandhi family had appealed against the case filed by me even in the Supreme Court, only to taste disappointment. The Patiala House Courts had observed that according to the case filed by me, irregularities indeed happened and a trial should be conducted.

Since the matter pertained to financial offence, they were released on bail... and from there, everything began. Hearings were being held and many papers and documents also came out.

I had sought some other documents as well as per the procedures, which was opposed by the Congress. However, I finally got hands on them after approaching the higher courts. Later, it came to my notice that there were some income tax-related frauds as well. A probe into the matter eventually found them guilty. Since the matter was challenged, it is now in the Supreme Court.

Q: On what basis did you say that irregularities took place?

A: Sonia and Rahul Gandhi had founded a firm named 'Young Indian Limited' for which the paid-up capital was only Rs 5 lakh. That firm had offered the Congress a loan of Rs 50 lakh so that on the basis of that loan amount, the responsibilities for Associated Journal Limited could be transferred to Young Indian Limited. That's how, by offering just Rs 50 lakh, they acquired the company that published the National Herald newspaper. However, the value of the company at that time, including the building and other assets, was around Rs 5,000 crore.

Q: But even as you're claiming that they went on to take over a firm worth Rs 5,000 crore for a consideration of just Rs 50 lakh, the Congress, including Rahul Gandhi, has been coming up with allegations against the BJP-led government...

A: Their allegations are totally incorrect. I had written to the government in 2014 after the BJP came to power that the case should be probed by the Enforcement Directorate.

I had written to the government back then that Rs 1 crore was taken from a fake Kolkata-based firm -- Dotex, whi was involved in hawala transactions and money laundering, and from that amount, Rs 50 lakh was utilised to take over Associated Journal Limited. I had also written to the ED that Dotex was already under scanner for its suspicious activities.

Later, I came to know that the Congress had issued cheques to Dotex from Switzerland-based banks, and Dotex had converted those currencies into INR and 'paid' the Congress... this is a clear instance of money laundering and it comes under the Prevention of Money Laundering Act.

Q: So you mean to say that the Congress and its higher ups are linked to hawala traders?

A: Of course... they received money from foreign banks about which I had apprised the government as well.

Q: What do you think would be the outcome of the National Herald case?

A: On the basis of all the facts available in this case, Sonia Gandhi, Rahul Gandhi and others would certainly be jailed. If the BJP government stays in power, they will surely be imprisoned. But in case the Congress comes into power, nothing can be said... but even then, I would continue taking the matter to the courts.

Q: Your plea on Supreme Court's call to declare Ram Setu a national heritage would be taken up for hearing soon. Why you had to knock the court's door on the matter and what do you expect from the court now?

A: I had filed two petitions in the Madras High Court in 2007. Later I went to the Supreme Court. On the basis of my plea, the Supreme Court refused to give nod to the plans for breaking/splitting the Ram Setu for the Sethusamudram Project. I have been involved in the process to get Ram Setu declared a national heritage site since a long time.

My efforts got a major boost after the BJP came to power. Eventually, I approached the Supreme Court with an appeal to declare Ram Setu a national heritage, and that the government be given the responsibility to preserve, maintain and conserve it.

The court has already issued notice to the government on the issue, and I expect a positive outcome following the hearing scheduled to take place next week.

Q: You have also been vocal on social media about the current economic condition of the nation...

A: As far as the question of economy and the country's economic condition is concerned, I need to say that the government's economic policies are totally wrong. The Finance Minister is unable to manage things... and the officials are simply trying to defend themselves.

However, the truth is that the economy is currently under a massive crisis, and it could implode any moment. I have been constantly writing to the Prime Minister regarding this serious issue.