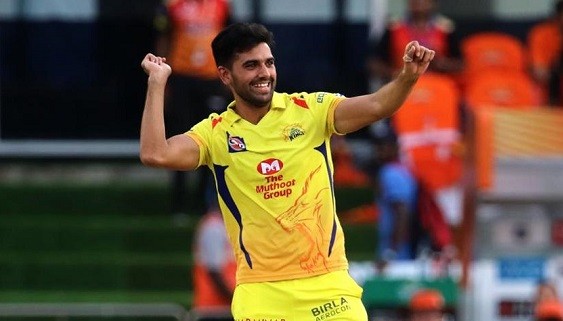 Chennai Super Kings stomped all over Kolkata Knight Riders to register a seven-wicket victory at Chepauk and claim pole position halfway through the IPL season. Deepak Chahar's early wickets and the spin trio of Harbhajan Singh, Imran Tahir and Ravindra Jadeja held back the Knight Riders line-up with accuracy, before the 109-run chase was dealt with quite easily by the hosts.

Knight Riders managed to get past the three-figure mark mainly due to another major contribution from Andre Russell, who was unbeaten on 50 off 44 balls. It wasn't one of his special knocks, though, as the Chepauk pitch unsurprisingly offered more to the spinners.

Faf du Plessis, who was unbeaten on 43 off 45 balls, and Ambati Rayudu handled spin better, as they ensured an easy chase. But it was set up by how Chahar started the game, taking three wickets at the top which took the wind out of the Knight Riders innings.

Chahar's reputation for being one of the most effective Powerplay bowlers got further enhanced after a three-wicket burst, as Chris Lynn, Nitish Rana and Robin Uthappa were all dismissed in his first three overs, reducing Knight Riders to 24 for 4 by the fifth over.

All three fell trying the cross-batted pull-shot, with Lynn being trapped lbw while Rana and Uthappa were caught at short and deep midwicket respectively. Chahar's initial breakthroughs provided the perfect platform for Super Kings' spinners who then grabbed control.

Harbhajan had already got one wicket when Chahar was on fire at the other end during the Powerplay. He had the dangerous Sunil Narine toe-ending a slog which was caught at point. Tahir then removed Knight Riders' captain Dinesh Karthik and Shubman Gill in consecutive overs. Both batsmen were caught trying to play the flick, Karthik caught at short midwicket while Gill had the googly slip through his bat and pads, to be stumped. Harbhajan added a second in his second spell, having Piyush Chawla stumped in the 16th over.

Despite walking into the middle with the score at 44 for 5 in the ninth over, Russell rallied the Knight Riders' floundering innings right till the end. He slammed Harbhajan and Chawla for sixes in between getting dropped by the former at midwicket, when on 8.

When Knight Riders slipped to 79 for 9 in the 17th over, Russell farmed the strike with Harry Gurney, ensuring he faced 16 of the 21 remaining deliveries. He managed to hit two more sixes although his arms started to hurt by all the swinging of the bat.

Narine removed Shane Watson and Suersh Raina in the first five overs but du Plessis and Rayudu eased their concern with a 46-run stand for the third wicket. They hardly pressed the panic button, and were only on the lookout for a boundary when presented with a bad ball or a big gap.

Rayudu fell with 28 runs required in the last 5.2 overs, but du Plessis and Kedar Jhadav got them home with 16 balls to spare.