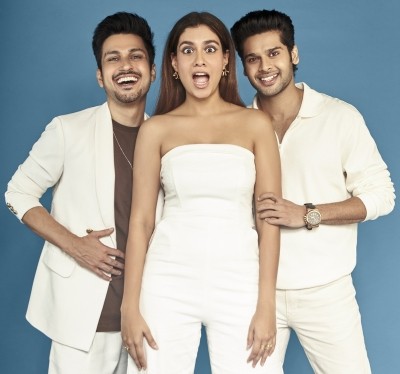 Mumbai,  Abhimanyu Dassani, Amol Parashar and Shreya Dhanwanthary will be sharing the screen in the upcoming film titled 'Nausikhiye'. The film will be a rib-tickling comedy and will be directed by Santosh Singh.

Talking about the film, actor Abhimanyu Dassani, who is known for his work in 'Meenakshi Sundareshwar' and 'Mard Ko Dard Nahi Hota', said in a statement, "I'm looking forward to the blast I'm going to have shooting this mad, mad-capper. 'Nausikhiye' has a quirky charming small-town vibe, with great music, hilarious situations, and zany characters."

The film will present the story of two wedding crashers who accidentally steal a bride, triggering a zany cat-and-mouse chase across the countryside. The cameras will soon begin rolling for the film.

For Abhimanyu's fellow actor, Amol Parashar saying yes to the script was a no-brainer as he was hooked to the idea.

Parashar said, "When the script was narrated to me, I said yes almost immediately. This one's an absolute laugh riot. Comedy has been my favourite genre as an actor and viewer. I'm looking forward to diving into prepping and shooting."

Actress Shreya Dhanwanthary said, "This film is like homecoming. It's my third with Ellipsis. I'm super excited to be a part of this crazy comedy which had me in splits from the word go. You can't go wrong with universal entertainers, more so in these times. My audience will also get to see me in a new light unlike some of the roles I've essayed in recent times."