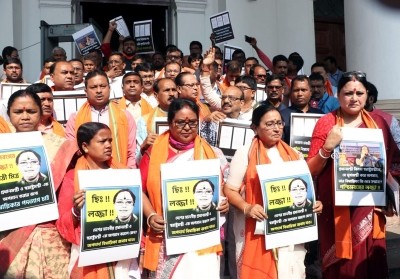 "The matter will be discussed by our legislative team following which a decision will be taken. We might move a motion against the Speaker in the next budget session of the Assembly scheduled next year," Adhikari told mediapersons.

After the Speaker on Monday refused to admit an adjournment motion moved by the BJP for a discussion on the teacher recruitment scam, BJP legislators started protesting inside the House.

"While we were protesting, the Speaker read out the names of four BJP MLAs whose names figured in today's 'Mention List'. However, since they were protesting, they couldn't speak. Also, the House was not in order to allow anyone to speak. Thereafter, the Speaker ordered that these four BJP legislators will neither be able to move any motion or be proposers in any motion for the next two days," Adhikari said.

The leader of opposition claimed that this action on the part of the Speaker is beyond his jurisdiction.

"The state Cabinet is answerable to the Assembly and it is unjustified to prevent discussions on a Cabinet decision in the House under the pretext of the matter being heard in the court. If the Speaker continues to adopt similar methods, we will be constrained to move a no- confidence motion against him in the next budget session of the Assembly," Adhikari said.

This is not the first time during the current winter session that BJP has staged protests on the Speaker's decisions on adjournment motion brought by the principal opposition party.

On November 21, the Speaker refused to admit an adjournment motion brought by BJP seeking discussion on the derogatory comments made by state minister Akhil Giri concerning the looks of President Droupadi Murmu.