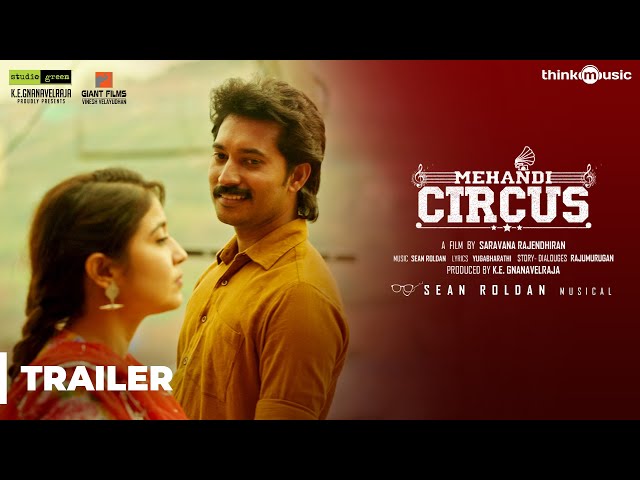 Mehandi Circus is a simple love story that unleashes nostalgia for the golden age of Tamil film music of the 1980s and early 90s, the time when Ilaiyaraaja ruled the charts. Romance fills the air as the film opens with a grandmother narrating a fairy tale to her granddaughter about a prince and princess who had to undergo trials and tribulations before their love finally triumphed. The film set in 1992 in the breezy climes of Kodaikanal which, in a way, echoes with the fairy tale. The narrative works largely due to Sean Roldan’s haunting score and Shwetha Tripathi’s fabulous performance.
Mehandi Circus movie review: Shweta Tripathis feel-good film is an ode to 90s Tamil music

Directed by Raju Saravanan, the story and dialogues of Mehandi Circus have been written by Raju Murugan, who made the much talked about Joker. In the film, Jeeva (debutant Madhampatti Rangaraj) runs a cassette shop while Mehandi (Tripathi) is a touring circus artist from Maharashtra. The two slowly fall in love over Ilaiyaraaja’s music (the story pays ode to the composer's 'O Papa Lali' from Geetanjali and half a dozen other classics) and Ravi's 'Yeh Raatein Yeh Mausam' song from Dilli Ka Thug.

A circus named after the heroine and run by her father (Sunny Charles) comes to the scenic village. Mehandi is the biggest attraction as she is scheduled to do the knife throwing act. Soon, Jeeva, a romanticist who has grown up on Ilaiyaraaja songs falls madly in love with Mehandi over her daredevil act and she reciprocates his feelings, given his sincerity. However, his father (Marimuthu), the village strongman and a casteist, is strongly opposed to the relationship. A local priest (Vella Ramamurthy), who believes in universal love and has helped couples in the past, comes to their rescue. He helps them elope, but their happiness is short-lived as Jeeva’s father and his men track them down. Mehandi’s father terminates the circus show in the village and disappears with his crew shortly.

All this is told in flashback in the year 1992. The story then cuts to 2010, when Mehandi’s daughter Nisha (Pooja) comes in search of Jeeva, now a alcoholic. She wants him to meet her ailing mother who now lives in Mumbai. It is the first half of the film, the nostalgic Ilaiyaraaja era, that holds the film together. There is a passing reference to AR Rahman’s music (he replaced Ilaiyaraaja as the most popular composer) as one of the characters say: "the new boy might be a flash in the pan!" In a way, the writer and director bring out a popular theory in Kollywood that 1992 was the cutoff date for Tamil film music with the arrival of AR Rahman. Music director Harris Jayaraj’s chartbuster 'Ivan Yaaro from Minnale' is also derisively referred to by one of the characters: Cinema paattaa idhu (Is this film music?).

However, the second half of the film is a big drag and the audience can predict where it is heading when Jeeva travels to Mumbai. Instead of a feel-good ending with some drama thrown in, the film would have worked better if it had an emotional ending. The major pluses are Tripathi’s terrific performance and perfect lip sync, Sean Roldan’s music and Selvakumar’s stellar camera work. RJ Vigneshkanth provides some laughter with his comic takes on AR Rahman’s music as Jeeva’s close friend. On the whole, Mehandi Circus is a feel-good flick which evokes cinematic nostalgia.