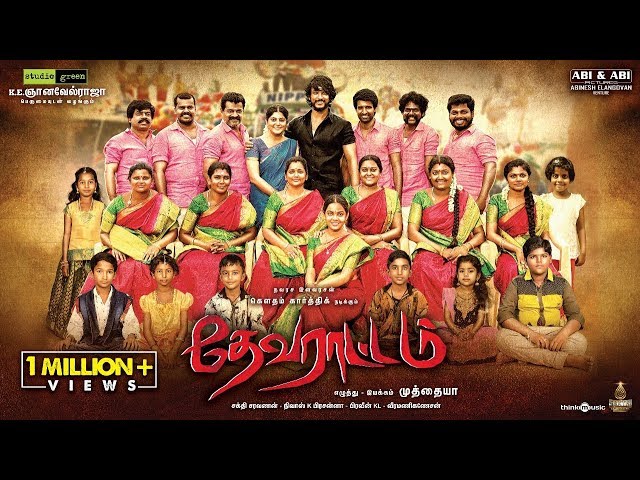 Devarattam is another template film from director Muthiah, who comes from a village near Madurai. He makes movies set in a rural or semi-urban Madurai milieu like his mentor, director-turned-actor Sasikumar used to, a few years back. Village-set mass entertainers have always been safe bets for commercial filmmakers as they still believe it has audiences in tier 2 and 3 markets.

It is Muthiah’s fifth film in five years and the director has so far had an impressive run at the box office. The story remains the same with minor changes here and there. It is about an angry, young man reluctantly taking up the mantle after being pushed to take revenge against the deadly villain in a very violent manner. Throw in an emotional angle loaded with motherly or sisterly sentiments, a love story which blooms after the usual misunderstandings, a popular comedian who has his own track, a bit of caste politics and some topical social issues. Other regular ingredients like temple festival songs and long drawn out fights in slow motion make sure the film strikes a chord with the masses.

Devarattam follows the Muthiah story pattern – Vettri (Gautam Karthik) lives in a joint family with six sisters and their husbands. He has been brought up by his eldest sister (Vinodhini) and their relationship is more like a mother and son. Vettri has an anger problem and gets into unnecessary fights. But everybody in the family loves him as he is the first advocate in their family. However, soon he takes the law in his hands when he murders a sexual offender - his friend who happens to be the son of Madurai’s dreaded gangster, Kodumpavi Ganesan (FEFSI Vijayan). Ganesan swears revenge and promises to kill Vettri just like he murdered his son in the streets of Madurai in broad daylight.

The story and presentation are as old as the hills of Kodaikanal and look similar to the plot of Muthiah’s previous films. The film’s core issue is borrowed from the recent Pollachi sexual assault case. What works for the film is Gautam Karthik’s lively performance as the angry, young lawyer Vettri. With Devarattam, M Muthaiah gives Gautham Karthik a chance to shed his urban lover boy image and become a mass rural action hero. But to project him as a one-man army taking on a hefty villain seems a little far-fetched. Manjima Mohan looks good on screen but hardly has any impactful scenes. Vinodhini as the hero’s elder sister does a neat job, especially in the climax. Nivas K Prasanna’s music is hummable and Sakthi Saravanan’s camera is attention grabbing.

The film has a pacy first half, but the tempo drops in the second half as the story progresses towards a predictable climax. In the end, Devarattam seems like just another film which shows Madurai as a traditional land that is also a blood-soaked, lawless place where cops and gangsters are hand in glove. And much like its backrop, such a film will only appeal to those who like watching films set in Madurai.