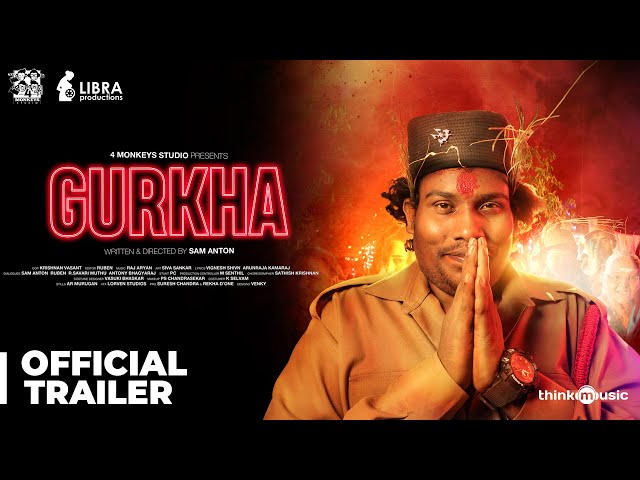 I cannot remember the last time a Tamil film protagonist had North Indian lineage. Sam Anton’s fourth directorial, Gurkha, tells us that Bahadur Babu (Yogi Babu) is from the bloodline of the Gorkhas. In true Sam Anton style, his ancestry is explained in a sentence when a character calls Bahadur a “North Indiavum North Madrasum sernthu senja kalavaram.”

Said to have been inspired from the director’s own life, Bahadur’s introduction scene as a Gorkha, dancing merrily to Ek Do Teen along with his cousins, is followed by him nabbing a few wrongdoers in his style. This style of humour, which Yogi Babu seems to have made his own, is undoubtedly the biggest asset of Gurkha. While his previous films, including his latest as the lead, Dharma Prabhu, relied predominantly on one-liners, Gurkha also relies on situational comedy.

Before failing a police selection test, Bahadur, who even quotes the director’s own 100 as an inspiration, helps his grandmother atop a stool, so he can touch her legs and seek blessings. You see, he can’t bend as he has just had a heavy meal. At the test, Bahadur, instead of jumping over the hurdles, picks them up and gives it to a baffled inspector, Haris Jayaraj (Ravi Mariya), because he believes it to be a genuine hazard for the runners. His concern also extends to gymnasts, as he is worried about their intestines might fall out. When asked to do push-ups, he lies down and moves his hands up and down as he thinks it to be easier. Such efficient comedy by Yogi Babu is the result at the hands of a competent director.

Bahadur ends up getting a dog named Undertaker instead of an offer letter and joins a security service after its proprietor (Manobala) gets impressed with his ‘skills’, when he lifts a bubbletop water can. Shortly, he gets transferred to a mall, which gets taken over by a gang of terrorists. The director mentioned in an interview with us that this film is inspired by Paul Blart: Mall Cop, and Die Hard. While the happenings inside the mall bear similarity to the Bruce Willis-starrer, the iconic Segway from Paul Blart is given a homage of sorts when Bahadur uses a portable scooter in the climax.

The film has a lot of nifty touches that make us laugh. In the office of the Chief Minister, a photo of Bijili Ramesh is captioned as the former CM. The My Vellakaari song starts with the words, ‘Indha paadalai padiyavar ungal GV Prakash Kumar’. References to other films are also very many — right from Mersal and Vivegam, to even Suryavamsam and even Sagaptham. Much like how Sam Anton played with the ‘ennama neenga ippadi panreengalema’ line in his first film, Darling, he uses many repetitive references to current affairs in Gurkha. There are the done-to-death Thermocol and god-man jokes too, but there’s also a scene involving a politician knocking off a mobile phone.

The film is full of funny lines, with able use of word play. In a scene where a cop tells Harris to abort a mission, he asks, “Yethuku saar mission-ah abortion panreenga?” Even the usual trope of an actor’s inability to speak English is efficiently used here for humour: Bahadur calls his love interest, Margaret (Elyssa Erhardt), Market, and when he likes her a bit too much, he calls her Supermarket.

The serious sequences involving the terrorist gang’s actions are a dampener though, with the stakes never being too high. Actors like Mayilsamy and Charle are also underutilised. Racist slurs are passed off casually — a North East person is referred to as Japan munju and a dark-skinned person is called a Nigerian. When responsible filmmaking is the need of the hour, such scenes cannot be brushed under the carpet as mere jokes. These flaws don’t kill this film though, whose comedy largely works. This Gurkha and his bag of jokes, save the day.