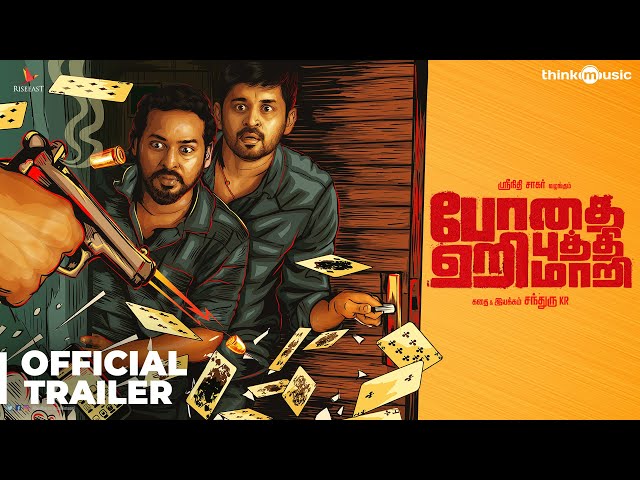 One of the biggest criticism against the fun-filled Vijay Sethupathi film, Idharkuthaane Aasaipattaai Balakumara, was that the PSA about alcohol addiction came a bit too late. Vijay Sethupathi and his sidekick/friend Daniel Annie Pope have too much fun being alcoholics that the final message feels forced. No such accusation can be made against Bodhai Yeri Budhi Maari, which marks the directorial debut of pilot-turned-filmmaker KR Chandru.

The film begins on a gruesome note showcasing the drug-fueled violence unleashed by a man unable to deal with the rejection of his ex-girlfriend. It then moves on to a de-addiction centre where the hero Karthik (newcomer Dheeraj) gets a slo-mo entry supported by a loud, but engaging background score. He is there to talk about the ill-effects of drug consumption. We hear stories of how drugs derailed the lives of the members of that de-addiction centre.

There are reasons galore right in the beginning of the film to visually represent the government-mandated statutory warning that pops up every second minute on the screen. But before the film ventures into Samuthirakani-redux territory, we are introduced to the life and times of Karthik. He is a guy who had everything going for him, till you-know-what comes into contact with his nostrils. Karthik is getting married the next day, and his friends trick him into attending his own bachelor party.

There are alcohol and drugs involved. After a freakish snorting incident, we have a hero who has no recollection of the last five hours. Though Bodhai Yeri Budhi Maari’s premise feels like the love child of The Hangover and Naduvula Konja Pakkatha Kaanom, the film has enough merit to stand on its own. However, the filmmaker’s reluctance to peg Bodhai Yeri Budhi Maari into a particular genre becomes both the selling point and drawback of the film.

Is it a stoner comedy like the recently released Bharath-starrer Simba? Is it a labyrinthine crime thriller like Arulnithi’s K-13? Is it a hyperlink story about a drug syndicate, corrupt cops, and a group of friends who just wanted to get sloshed like numerous Venkat Prabhu films? Though the switch between genres, including horror, is bumpy, the film does manage to keep us invested. Bodhai Yeri Budhi Maari works especially well in the second act, which is almost a chamber drama.

Director Chandru and screenplay writer Kathir Natarasan stage one impressive sequence after the other, and armed with the expository music of composer KP, almost pull off an audacious film. However, the third act is a misfire and a major downer. The tonal shift feels jarring and the overtly theatrical performances by the supporting actors don’t help either.

Dheeraj convincingly sells the stoner facet of the character, doing a decent job when reeling under the consequences of his drug-induced trip. However, most of the other actors, including supermodel-turned-actor Pradaini Surva, have very little to do. Kireedam-fame Ajay, as a hard-boiled cop, does stand out with his imposing demeanour. Though the makers have cleverly featured Bigg Boss-housemate Meera Mithun in the promos, she plays essentially a blink-and-you-miss role. Veteran actors like Charle and Radha Ravi too are wasted in inconsequential roles with unbelievably limited screentime.

In one of the initial scenes in the Bodhai Yeri Budhi Maari, bone-crunching gut-smashing violence is immediately followed by someone watching Tom and Jerry, and this contrast is enjoyable. The scenes blurring the lines between reality and hallucination are noteworthy as well; special mention to cinematographer Balasubramaniem for his work in these portions. There is intent, and it’s delivered with tongue firmly in cheek. It is such ingenuity, also seen in the lone song sequence, Virgin Stoner, which goes missing when the makers decide to deliver a social message. It rings false, and the ending almost nullifies the sharpness in the middle portions.

True to the film’s title, Chandru does take us on a mildly intoxicating ride and helps us reach a perceptible high. However, instead of letting us slowly waltz in the la-la land in our minds, we are crash-landed back to reality with a huge brightly-lit neon sign that says: ‘Drugs are bad’. Well, for the majority of us who knew that even before embarking on this ride on the high skies, the least they could have done is made the landing a bit smoother. I mean, who even likes to have a hangover?