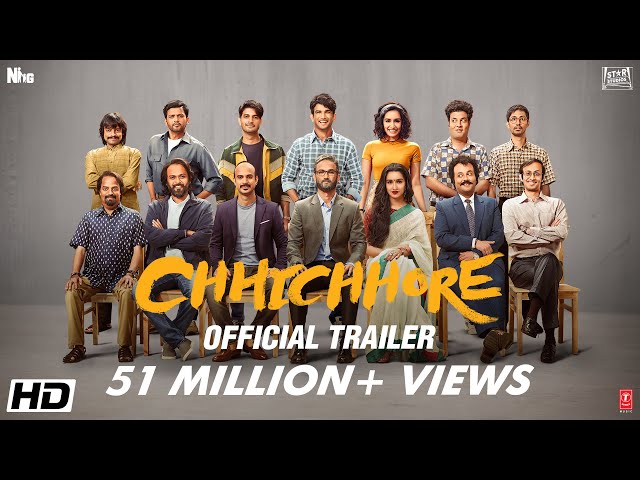 A present-day tragedy sends Annirudh Pathak (Sushant Singh Rajput) off in search of his best buddies from his youth. They were all students at India's most prestigious engineering college about two decades back when they joined forces to get rid of the loser tag slapped on their hostel by the rest of the institution.

Anni gathers his gang - now older and many of them balding - around his son to recount their shenanigans from back then and convince the boy that winning is not everything, that the fight counts. At first Anni's ex-wife Maya (Shraddha Kapoor), who was also their collegemate, is cynical about this strategy to lift the child's spirits. She changes her mind though as the group gets deeper and deeper into their story and their young listener begins to get involved with these characters, some of who once went by the names Sexa, Acid, Mummy and Bevda.

Writer-director Nitesh Tiwari had his heart in the right place when he conceptualised this project. Chhichhore (The Childish Lot) is about an India that teaches youngsters to slog, compete and celebrate victory but almost never counsels them on how to handle defeat. It is a lesson that this country and its blinkered education system, pushy parents and mindless teachers sorely require. It is a lesson that sensible parents and forward-thinking teachers have long tried to propagate. The vehicle for this messaging needed to be less shaky though.

From the word go, Chhichhore's 3 Idiots hangover is evident. That 2009 blockbuster by Raju Hirani was not without flaws - its take on education was simplistic and one-dimensional, it cast men in their late 30s and mid 40s as teenagers, and it trivialised rape in that horrid "balatkaar" speech. For the most part though, its humour was not insensitive, and one thing is for sure: 3 Idiots had its own voice. Chhichhore is a film in search of a voice that ends up looking, feeling and sounding all mixed up.

Too much about this film is uneven and confusing. For a start, how come the boys have aged when we meet them in the present day but Maya has not? The only change in her is that her attire and styling are less sassy and flouncy. From Western dresses and short hair the older Maya has switched to staid cotton saris, salwar suits and a boring bun. But her skin, hair, posture and gait remain unchanged. It is as if Team Chhichhore felt that unlike men, ageing women are not worthy of screen space.

Even Maya's wardrobe and style in college are inexplicable. She has the appearance of a girl from a much earlier era than her male collegemates, perhaps the 1960s.

Not that the men fare much better in their senior avatar. With the years added to their lives, their hairlines recede but several of them continue to have skin as supple as a baby's bottom.

These might have been excusable glitches if Chhichhore had got its tone right, but unfortunately the narrative never quite settles into doing its own thing. Both thematically and tonally, the film is trying to be what it is not throughout, borrowing heavily from 3 Idiots in terms of mood and even plot points. And the back and forth switches between the present and the past are just not effective.

What works in Chhichhore are the sports contests which do have an air of suspense about them, a considerable part of the banter between the friends in their younger days, and the energetic songs 'Control' and 'Fikar Not' (music: Pritam, lyrics: Amitabh Bhattacharya).

Nitesh Tiwari clearly has a talent for setting up battles in the sporting arena - he proved that in his last film, Dangal, and proves it again here. The many matches in Chhichhore, the boys' hilarious immaturity and sharp tongues are often thoroughly entertaining. And while Maya remains a shadow in the background of the narrative that is anyway largely bereft of women, it is nice to see a Hindi film set in an environment where gender segregation is the norm but the hero's wooing of the heroine is not noxious and stalkerish.

None of this is, however, enough to sustain Chhichhore. There are too many draggy patches in between, the acting is inconsistent, and the somewhat superficial messaging adds nothing to the "what matters is that you tried" line we have heard before.

The writing of Chhichhore (by Tiwari himself with Nikhil Mehrotra and Piyush Gupta) is so lacking in depth, and the direction so passionless that it is hard to believe it is brought to us by the same person who made Dangal. Despite its sporadic bursts of humour, Chhichhore comes across as a half-hearted enterprise.