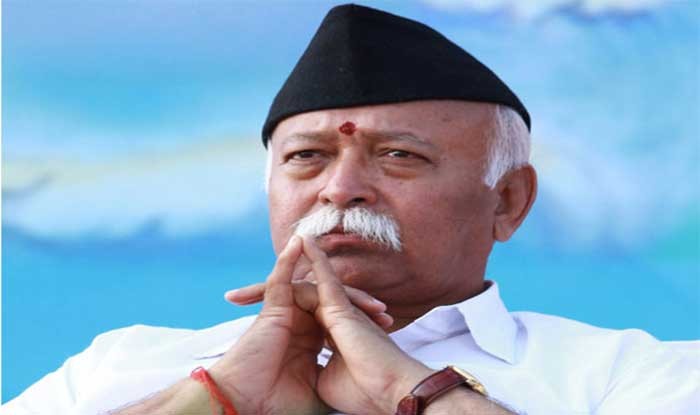 A new thinking based on India’s core strengths needs to be evolved to insulate the Indian economy from ill effects of the world economy will have to be developed, Rashtriya Swayamsevak Sangh (RSS) chief Mohan Bhagwat said here as he addressed Dusserrah Rally at Nagpur on Tuesday.

“Answers to the situation arising out of slowdown in world economy will have to be searched within the ambit of Swadeshi or Selfreliance and Ahimsa,” Bhagwat said.

He added that, to minimize the impact of other immediate crisis and the ups and downs of the world economy on our financial system, we need to go to the basics and ponder.

“We have to formulate our own economic vision keeping in mind our requirements, profile and condition of our people and our resources and potential to realize our national aspirations. The prevailing world economic thought is unable to answer many questions. Its standards are also incomplete in many ways, this fact has come before several economists of the world. In that situation, we have to take steps to formulate our own economic vision, policy and system that instils in us the capacity to create more and more employment with least consumption of energy that is beneficial for the environment, make us self-reliant in every aspect, and create and expand trade relations with the world on the basis of our strength and terms,” he said.

He also said in the past few years, there has been a transformation in "direction of thought process of Bharat".

"There are many people in the world and in Bharat as well, who don't want this. A developed Bharat creates fear in the minds of vested interests. Such forces will also not want Bharat to be strong and vibrant," the RSS chief said.

Even well-meaning policies, statements from persons in government and administration were being misused to benefit nefarious designs by vested interests, he rued.

"We must be alert in identifying these plots and counter them on intellectual and social levels," he said.

Bhagwat said the world was eager to know if the 2019 elections in such a huge country will be conducted smoothly.

"Democracy in India is not something imported from any country, but a practice which has been prevalent here since centuries," Bhagwat said.

He said India's borders were now safer than ever, and more focus was needed on coastal security.

"The number of guards and check-posts on land borders and surveillance along the maritime border, especially on islands, have to be increased," he said.

Bhagwat also deplored incidents of mob lynching and said that the RSS is trying to create harmony in the society and avoid such incidents. But terming the incidents “lynching” is a deliberate attempt to defame the nation, he added.

“Sangh has never supported such incidents and would never support. Such cases need to be handed over to the law enforcement agencies and the government should deal with them sternly,” he said.

“While Sangh Swayamsevaks are working in the direction so that such incidents do not take place, branding them lynching is a deliberate attempt to defame India,” he added.

Bhagwat also dealt with the issues like education, environment, gender sensitivity and corruption saying that answers to these issues need to be searched in light of Indian thought.

Bhagwat also said that his organization is firm on its vision that 'Bharat is a Hindu Rashtra', adding that all Bharatiyas working for the nation's glory and enhancing its peace are 'Hindus'.

"Those who belong to Bharat, those who are descendants of Bharatiya ancestors, those who are working for the ultimate glory of the nation and joining hands in enhancing peace, respecting and welcoming all diversities; all those Bharatiyas are Hindus," he asserted.

HCL founder Shiv Nadar was the chief guest at the occasion while several other dignitaries including Bharat Forge chairman Baba Kalyani attended the function. The RSS chief also hailed the Lok Sabha results and congratulated the government for the abrogation of article 370 and the Chandrayaan mission.

Nadar said government alone cannot take the country to the next level, and asked all stakeholders to pitch-in for solving the problems and challenges being faced by the nation.

He also urged the private sector, citizens and NGOs to come forward to resolve the challenges.

"Government alone cannot take the country to the next level, we need equal involvement from all stakeholders," said Nadar, who was the chief guest at the Sangh's annual Dussehra event this year.

"The country faces many challenges, but the government alone cannot solve the problems. The private sector, citizens, NGOs must also contribute to overcome these challenges," he said.

Delving on the significance of Dussehra festival, which symbolises the victory of good over evil, he said it is a constant struggle to defeat the "evil within and outside".

"Dussehra celebrates the triumph of Lord Rama over Ravana, dharma over adharma. Good over evil. The mythic win of good over evil is never absolute, never complete. It's a continuous struggle to defeat the evil within and outside," Nadar said.

Wishing everybody on the auspicious occasion of Vijayadashmi, he said, "I am honoured and privileged to be invited to speak to you today and join in the celebrations. The Reshimbagh ground has truly come alive today with the energy of all the RSS workers."

Besides Nadar, Ratan Tata, Rahul Bajaj and Azim Premji are among India Inc bigwigs to have earlier visited the RSS headquarters here.