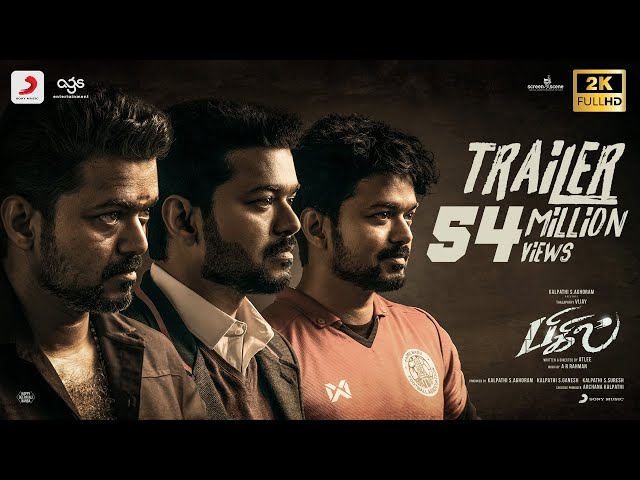 Fans, who gathered for the midnight screening of Tamil actor Vijay's Bigil, staged a riot in front of a theater at the five road junction resulting in the Krishnagiri police increasing security in front of all movie screens across the district. Bandi Gangathar, Superintendent of Police, Krishnagiri, announced that 32 of the rioters have been arrested and they will be severely charged for the offense.

Dozens of shop banners, water tanks and vehicles were destroyed as hundreds of youths who gathered for the special fan screening in a private theater in Krishnagiri's five road junction for 'Bigil' rioted through the night as the theater refused to hold the special fan screening. As much as 32 youths have been arrested for instigating violence and they will be booked under Public Property Destruction Act said Bandi Gangathar.

'Bigil' directed by Atlee starring Vijay is one of the most anticipated movies this Deepavali with fans. However to curb the exorbitant charging of the first screening, the Tamil Nadu government had previously announced that special screening will not be held and theaters must only screen the show at the regular timings. Following this many theaters cancelled the midnight screening aggrieving fans across the state.

However, in the late hours of Thursday, the state government overturned its stand and allowed for the special screening of the movie. Fans immediately gathered for the screening at the theater located in the Krishnagiri five road junction and started burning crackers and chanting slogans in excitement. However,  the theater operators had failed to upload the movie ahead and told the gathered fans that they will not be screening the movie, Angered over this, fans immediately took to the streets and destroyed vehicles, shop banners and even destroyed a drinking water tank set up by the Krishnagiri Municipality.

The Krishnagiri Police immediately reached the place and diffused the situation. According to Bandi Gangathar, the vandalism incident happened in mere minutes. Most of the youths were drunk and were frustrated when the theater announced there will be no special screening.

However, many of the youngsters were also gentle and aided police in apprehending the trouble makes. The people, who had destroyed public property were identified by the fans and 32 trouble makers are in police custody. Following police instructions majority of the youths dispersed in an orderly fashion and there was no other incident of violence, he said.

When asked Bandi Gangathar about Hindu Munnani's hate campaign against Vijay as a cause, he said that it has been completely ruled out, While there are tensions, no party members were involved with the incident. Explaining that there is trend in the district of such minor rioting, Bandi Gangathar pointed out that last year during the screening of Mersal also there were minor incidents of rioting by fans.

The SP also said that all the arrested will be punished harshly and said that they will be booked under Public Property destruction Act and said that according to the act people are liable to receive over 10 year imprisonment if found guilty. Further he warned fans saying that security has been intensified in the district and all moviegoers should maintain discipline or action will be taken.