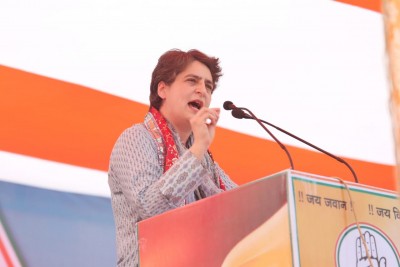 Mathura (UP),  Congress General Secretary Priyanka Gandhi Vadra said on Tuesday that the holy land Mathura is known to break the arrogance of people.

"Lord Krishna had broken the arrogance of Lord Indra and had lifted the Govardhan mountain on his finger to save the people here. This government has also become arrogant and will not survive the wrath of the farmers who keep the nation alive," she said.

Tuesday's meeting was in continuation of a series of Kisan Panchayats that the Congress is organising in 27 districts in western Uttar Pradesh against the three Central farm laws.

Priyanka said that nearly 215 farmers lost their lives during the ongoing agitation but the leaders of the ruling party did not even come to the Delhi borders to meet the agitating farmers though the Prime Minister travels across the globe.

"When my brother Rahul Gandhi observed two-minute silence in the Parliament in the memory of the farmers who had died, not a single member of the ruling party stood up in respect," she said, adding that when arrogance keeps leaders away form the people, "you know the end is near".

Priyanka said that the BJP had promised to double the income of the farmers and pay their cane dues.

"The cane dues amount to about Rs 15,000 crore. But instead of paying this, the government has bought two aircraft worth Rs 16,000 crore for the Prime Minister. This shows where their priority lies," she pointed out.

The Congress leader also expressed concern over the condition of gaushalas (cow shelters) in the Braj region, saying even the cows have not been spared by the government.

She further said that the new farm laws had been made to benefit the capitalist friends of the government.

"You must now save the 'Govardhan parvat' or they will sell it away too," she added.

The Congress General Secretary, while addressing a Kisan Mahapanchayat in Muzaffarnagar district on February 20, had lashed out at Prime Minister Narendra Modi.

She had said, "In our old stories, kings and queens became arrogant after they won power. After becoming the Prime Minister twice, Narendra Modi is also showing arrogance."