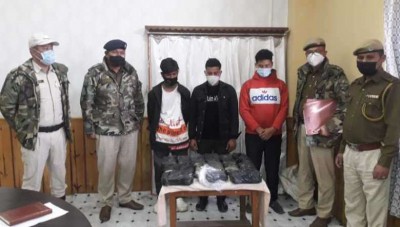 Imphal, Drugs worth Rs 14 crore were seized from two trucks and three persons were arrested in Imphal West district, said police officials on Tuesday. They suspect the consignment was bound for Myanmar.

Imphal West District Superintendent of Police K. Meghachandra said that on the basis of a tip off a police team intercepted two trucks, one with the registration number of Assam and another of Nagaland, near the Kanglatongbi-Shantipur area and recovered around 1,40,000 banned WY tablets.

"The drugs were brought from Assam and were suspected to be smuggled out to the international market through neighbouring Myanmar. Details of the drugs trade would be known after completion of the ongoing interrogation of the three detainees," Meghachandra told IANS.

The three persons, all residents of Manipur, were arrested under the provision of the Narcotics Drugs and Psychotropic Substances (NDPS) Act and sections of the IPC.

According to the police official, the WY tablets can be used as painkillers for patients suffering from cancer and other dreaded diseases but the drug addicts consume these for stimulation and intoxication.

Meghachandra said that the Manipur Police intensified its operations against the drug trade and vehicles coming into Manipur from neighbouring Northeastern states and from the Myanmar bordering areas are being thoroughly searched.

The WY and Yaba tablets, both containing high stimulating psychotropic substances, are misused as high-dosage drugs in Bangladesh and neighbouring countries, besides India.

Officials said that drugs and various other contraband including exotic animals and reptiles were smuggled from Myanmar which shares 1,643 km of unfenced border with four northeastern states -- Mizoram, Arunachal Pradesh, Manipur and Nagaland.

Smuggling of drugs, arms and numerous other contraband worth crores of rupees takes place frequently in the Northeastern region, mainly in Mizoram and Manipur from across the borders, especially from Myanmar.

The industry body, Federation of Indian Chambers of Commerce & Industry, said that the recent rise in smuggling in the Northeastern region can be attributed to the economic distress due to the Covid-19 pandemic.

"Loss of jobs and lack of income due to recurrent lockdowns have left citizens without means of livelihood. Reports suggest that smugglers and insurgents are using people from the local tribal areas to transport smuggled goods by taking advantage of their financial vulnerability caused due to Covid-19," a FICCI report said.

The FICCI's Committee Against Smuggling and Counterfeiting Activities Destroying the Economy (CASCADE), headed by Anil Rajput, appreciated the efforts of Assam Rifles, Border Security Force and other security forces and agencies in anti-smuggling operations.