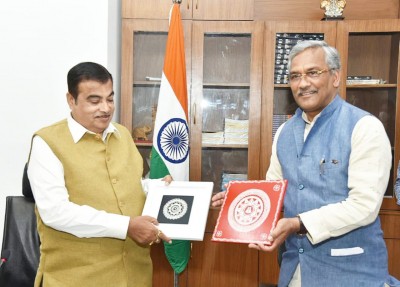 New Delhi, Uttarakhand Chief Minister Trivendra Singh Rawat met Union Minister for Road Transport & Highways, Nitin Gadkari, in New Delhi on Tuesday and thanked him for his cooperation in the development of road connectivity in the state. At the request of Rawat, Gadkari agreed to the approval of Rs 48 crore for the road project of the Dehradun Inter State Bus Terminal (ISBT).

Gadkari said, "Nearly Rs 225 crore have been approved for the construction of Rudraprayag tunnel and necessary action has been started on this project."

Gadkari agreed to help solve the problem of traffic jams in Jogiwala on the Haridwar-Dehradun NH and asked the state government to send its proposal soon.

Rawat said, "Rishikesh-Bhaniawala Motor Marg is the short link route in the Char Dham Yatra. Jolly Grant Airport is also situated between Rishikesh-Bhaniawala. Currently, it is only a two-lane route. Given the importance of this route, I have requested Nitin Gadkari to declare it a national highway."

The Chief Minister has requested these six highways to be notified as National Highways at the earliest.