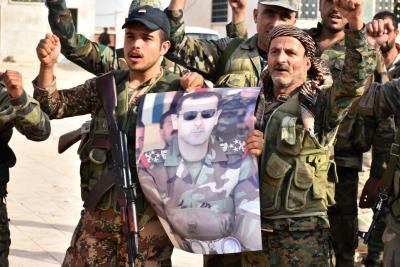 Damascus,  The candidacy applications of Syrian President Bashar al-Assad and two others have been approved for the upcoming presidential elections, it was announced.

The announcement was made on Monday by head of the Syrian Higher Constitutional Court, Jihad al-Laham, Xinhua news agency reported.

Besides Assad, the other two candidates are Mahmoud Ahmed Muri and Abdullah Salloum Abdullah.

The three applicants have passed all legal and constitutional requirements, while the rest of the 51 candidates have been rejected, including seven women, al-Laham said.

The election, scheduled to be held on May 26, comes seven years after the last polls took place in the war-torn country.

Syrians abroad will vote on May 20.

In the uncontested 2000 and 2007 elections, the incumbent President, who took office following the death of his father Hafez al-Assad, received 97.29 per cent and 97.6 per cent support, respectively.

Amid the raging conflict, Bashar al-Assad was sworn in for another seven-year term in July 2014 after another non-democratic election gave him 88.7 per cent of the vote.

The Syrian crisis entered its 10th year in March this year.