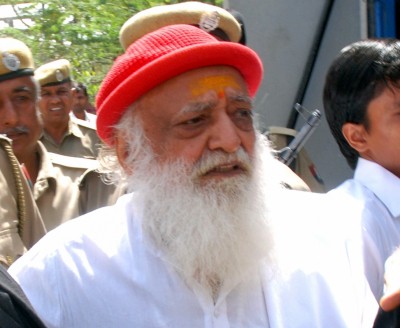 New Delhi,   The Rajasthan government has informed the Supreme Court that Asaram Bapu was not cooperating with the doctors at AIIMS Jodhpur with an ulterior motive of shifting of venue of his custody. The state government averred that Asaram has made third attempt to get his sentence suspended, under the garb of medical treatment.

The state government, in an affidavit, challenging the bail plea for Ayurvedic medical treatment of Asaram, said: "In previous round of petitions, the accused had prayed for immediate medical surgery of his ailment, through allopathic method, which failed and now the accused through this present petition raised his concern to get his treatment from Ayurveda."

The affidavit added that Asaram was not cooperative to the doctors at AIIMS Jodhpur, and as per May 21 discharge report, he had refused to take injection and some oral medicine.

"The accused was stable and fit to discharge and there was no other complication. Hence, there is no requirement of any further super specialities' treatment of the accused", said the affidavit.

The government said Arun Kumar Tyagi is the treating Ayurvedic doctor of the accused, who continued to treat him even after retirement from Jodhpur Ayurvedic Hospital, under the order of the top court. The government claimed Asaram was deliberately trying to delay the pending trial at Gandhi Nagar and Jodhpur, under the garb of Ayurvedic treatment.

Asaram had moved the apex court seeking permission to be treated at Prakash Deep Institute of Ayurvedic Sciences, Uttarakhand. The Rajasthan government placed on record on May 23, medical card, which established that Asaram's health was found normal without any complications. "The accused is not cooperating with the doctors for his ulterior motive of shifting the venue of his custody", said the affidavit.

The affidavit further added, "The accused/petitioner with ulterior motive has been attempting to change the venue of his custody, under the guise of medical treatment. Such change, with due respect, an abuse of process of law." The government added that Jodhpur is one of the rare centres, where both the allopathic and Ayurvedic treatment are available.

Last week, the top court agreed to examine the possibility of temporarily shifting convicted godman Asaram Bapu to an Ayurvedic treatment centre. Post-Covid, he had requested not to put on allopathic drugs.

The High Court had dismissed Asaram's application for temporary suspension of sentence and directed the district and jail administration to ensure proper treatment at a suitable medical institution.

Asaram is serving a life term at Jodhpur Central Jail in connection with the rape of a minor girl. On May 6, he had tested positive for COVID-19 and was shifted to AIIMS, Jodhpur. According to May 19, medical report he was stable and fit for discharge.

The top court is likely to take up the matter for further hearing on Friday.