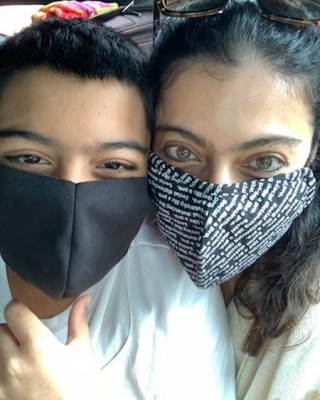 Mumbai,  Actress Kajol shared a picture with her son Yug on Instagram on Thursday. In the image, the mother-son duo sport face masks as they pose for the camera.

"The masked bandits!" Kajol, who is married to actor-filmmaker Ajay Devgn, wrote as caption.

The 46-year-old actress, who is known for her wit and humour, keeps posting quirky captions with photos on social media.

Kajol began dating Ajay in 1994 while shooting "Gundaraj". The two married in 1999 in a traditional Maharashtrian ceremony. They welcomed their daughter Nysa in 2003, and seven years later Kajol gave birth to son Yug.

On the professional front, the actress was last seen on screen in the digitally-released film "Tribhanga", directed by Renuka Shahane. The film narrates the story of three generations of women.