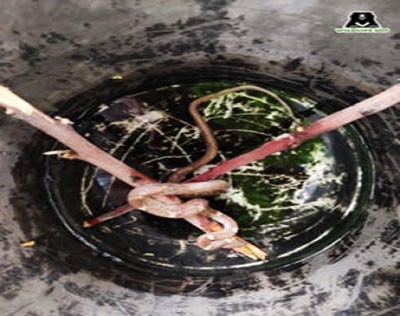 Agra,  A massive seven-foot-long rat snake was rescued by the Wildlife SOS rapid response unit from a garage inside the Air Force Station premises in Agra.

The snake was kept under observation for a few hours before it was released back in its natural habitat.

Surrounded by a lush green forest patch, the Agra Air Force base is no stranger to the presence of wild visitors.

On Thursday morning, a family residing inside the station stumbled upon a rat snake in their garage. They immediately reported the incident to the Wildlife SOS on their emergency helpline, requesting for immediate assistance.

A two-member team from the wildlife conservation NGO was soon dispatched to the location. Upon arrival, the team safely rescued the large snake and transferred it in a snake rescue bag. The snake was kept under observation for some time and was later released into a protected habitat.

Kartick Satyanarayan, CEO of Wildlife SOS, said, "The rising temperatures often force snakes out of their natural habitat, to find reprieve from heat and exhaustion. Our team works round the clock responding to multiple snake rescue calls every day. Rescues range from that of extremely venomous snakes like the cobra and common krait, to relatively harmless and non-venomous ones like the sand boa, wolf snake and rat snake."

Baiju Raj M.V, Director of Conservation Projects for Wildlife SOS, said, "Snakes are ectothermic which means that they need to use outside sources to regulate their body temperature. Therefore, on hot summer days, they seek out shade and shelter to stay cool. Our team is responding to multiple snake calls and the number is on the rise."

Rat snakes often wander into human habitation due to depletion of their natural prey base. However, due to their resemblance to cobras, this species is often misidentified as the highly venomous snake and is met with hostility and fear.