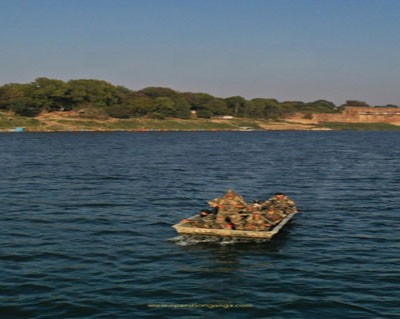 Varanasi (UP),  With the Ganga river in Varanasi turning green due to algae bloom, the district administration has started an extensive survey to find out its origin.

District magistrate Kaushal Raj Sharma has set up a five-member team to look into the matter and submit a detailed report after environmentalists expressed concern over the appearance of algae in abundance in the Ganga water, which may harm the aquatic life in the river.

Sharma said, "The team will go on a boat of the Jal Police in search of the source of the algae. The team will also examine how algae bloom covered the stretch of Ganga along the ghats. The algae first appeared around 15-20 days ago, which was examined by the officials of the Pollution Control Board."

It became visible again in the Ganga water in the last three-four days.

The district magistrate has asked the team to submit its report with all details along with photographs and videos.

According to environmental scientists, it might have come from some side drains or stagnant sources during the recent rainfall. It will disappear with the increasing flow of water.

The UP Pollution Control Board officials also claimed that the algae bloom is coming to Varanasi from the upstream of the river.

Environmental scientist and chairman of the Malviya Ganga Research Centre at Banaras Hindu University, Prof BD Tripathi said, "It will disappear with increasing flow of water. If the condition persists for a longer duration, it may cause fish mortality."

"Normally, neurotoxin-microcystin is produced by these algae which may be harmful to other aquatic animals."

A scientist of the Institute of Environment and Sustainable Development, BHU, Dr Kripa Ram said, "The algae grow due to increased nutrients in the water. During rain, these algae flow to the river from fertile lands. After getting adequate nutrients, they start the process of photosynthesis. Phosphate, sulphur and nitrate are the nutrients that help the algae grow."

Environmental scientist Prof Vishwambharnath Mishra said that the ecology of the Ganga is being disturbed for commercial gains, which will create serious problems in the future.

"The construction of a platform in the Ganga near Lalita Ghat has obstructed the flow of water. Due to the growth of algae in the upstream of Lalita Ghat, the colour of water has turned green. The presence of abundant algae in Ganga's water is not good for people's health," he added.

A local lawyer, Saurabh Tiwari, has filed a petition before the National Green Tribunal seeking its intervention in the matter.