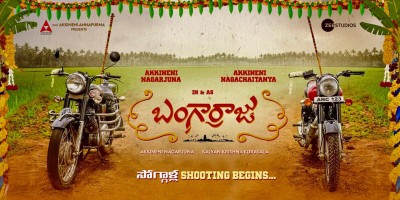 The film directed by Kalyan Krishna Kurasala, is a sequel to 2016 film 'Soggade Chinni Nayana', which also starred Nagarjuna.

The senior actor tweeted a poster of the film and captioned it as: "So very happy to start work for #Bangarraju along with @chay_akkineni !!! We welcome @ZeeStudios_in this exciting journey."

While Ramya Krishna, who was seen in SCN, is part of 'Bangaraju' as well. The makers have roped in the most sought-after heroine Krithi Shetty to play Naga Chaitanya's love interest.

Zee Studios will be co-producing the project with Annapurna Studios Pvt Ltd. Nagarjuna is the producer. While actress Ramya Krishna will star in the sequel as well, the cast welcomed actress Krithi Shetty as the female lead alongside Chaitanya.

'Bangaraju' is billed to be a wholesome entertainer laced with a good dose of romance, emotions and other commercial ingredients. Expectations are quite high on the project, since it is the sequel for the blockbuster and Nagarjuna and Naga Chaitanya are working together for the second time.

The last time the father-son duo came together, it was on the 2014 Telugu film 'Manam'