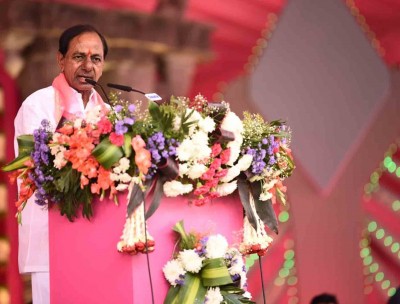 Hyderabad,  Ending the 2021 with a mixed bag, the ruling Telangana Rashtra Samithi (TRS) stares at some big challenges in 2022 as it faces rejuvenated opposition, growing public expectations, pressure to deliver on unfulfilled promises and the strained relations with the Centre.

The TRS government headed by K. Chandrasekhar Rao, which this month entered the fourth year of its second term in power, faces a daunting task in the new year, which is likely to set the tone for 2023 elections.

The defeat in Huzurabad Assembly bypoll and the row with the Centre over paddy procurement towards the year-end marred what was otherwise a smooth year for the KCR government. Both the developments are likely to cast their shadows in the coming year as well.

At the same time, with seven years in power in India's youngest state, TRS eyes a new role. The party chief appears to be keen to revive his national ambitions and play a key role at the Centre.

"KCR and TRS have reached a juncture where expectations and promises start to haunt the regime. People have started raising questions on the promises/assurances made over the years, especially the promise to create jobs. Suicides by youth in the recent months over lack of employment opportunities will continue to haunt KCR and TRS in 2022," said political analyst Palwai Raghavendra Reddy.

The coming year will see an aggressive opposition taking on TRS on the issues of agriculture and unemployment. Reddy pointed out that both Congress and the BJP have upped their game to emerge as a possible alternative to TRS.

However, the immediate challenge which the TRS government faces is on the agriculture front. Months after its claim of turning Telangana into a rice bowl of the country by expanding the area under paddy cultivation, the government found itself in a crisis with the Centre refusing to lift parboiled rice from the state citing lack of demand in the country.

With the Centre ruling out procurement of parboiled rice during the coming Rabi season, the TRS government faces the immediate challenge of convincing farmers to go for alternate crops. This is a daunting task given the reluctance of farmers to grow crops other than paddy for a variety of reasons.

The state government has already declared that it will not approach Centre to procure paddy during Rabi season as the Centre has ruled out lifting the stocks from the state.

Even during the current Kharif season, the state is facing a crisis in procurement as the production of paddy has far exceeded the target of 60 lakh tonnes fixed by the state. The TRS government is insisting that the Centre buy the entire stocks. A delegation of state ministers and MPs is camping in Delhi for the last one week to get a written assurance from the Centre.

The government has already come under flak for the sluggish pace of procurement from farmers. The opposition parties have claimed that 200 farmers committed suicide due to the government not procuring their paddy.

"Considering the large scale paddy production across Telangana, procurement will become a major challenge for the TRS government. And that is the precise reason, KCR is trying hard to shift the blame towards the Modi Government. It remains to be seen how farmers in Telangana will react to developments," said an analyst.

The paddy crisis saw TRS leaders and cadres taking to streets with the chief minister himself leading ministers, MPs, state legislators and other leaders on a three-hour sit-in last month.

In an indication that he is reviving his plans to play a key role in national politics, KCR declared an open war against the BJP-led Centre over its 'anti-farmer' policies. Broadening the scope of his fight, KCR offered to lead the nation-wide movement of farmers. As part of the efforts, the state cabinet on November 29 sanctioned Rs 22.5 crore to pay Rs 3 lakh each to the kin of 750 farmers killed during the nation-wide agitation against the three controversial farm laws of the Centre.

BJP, which is already working on its Mission 2023 to come to power in the state, is gearing up to turn the heat on TRS. This was evident after the recent meeting of state BJP leaders with union home minister Amit Shah.

Shah advised the BJP leaders to highlight the corruption of TRS and KCR and be ready for elections whenever they are held. The saffron party leaders do not rule out KCR once again taking them by surprise by going for early polls.

Anticipating the Modi wave in simultaneous polls impacting the prospects of TRS, KCR went for early Assembly elections in 2018, six months before they were originally scheduled. This worked to his advantage as TRS retained power by bagging 88 seats in 119-member Assembly, a huge improvement over its 2014 tally of 63 seats. He subsequently decimated the opposition by luring a dozen MLAs from Congress party.

However, KCR's hopes of cobbling up a Federal Front were dashed as Narendra Modi-led BJP stormed back to power at the Centre with a huge majority. By winning four Lok Sabha seats in the state, BJP emerged as a challenge for TRS.

After wresting Dubbak Assembly seat in 2020 and Huzurabad in 2021 from TRS and by significantly improving its tally in Greater Hyderabad Municipal Corporation (GHMC), BJP positioned itself as the number one opposition party.

The recent setback in Huzurabad was huge for TRS and personally for KCR as Eatala Rajender managed to return to Assembly barely five months after he dropped him from the Cabinet on the allegations of land encroachment.

Rajender was the first big TRS leader who challenged KCR's leadership and succeeded in retaining the seat even after switching loyalties. He won the bypoll despite KCR going all out to defeat him.

Analysts say with the Huzurabad debacle and Rajender emerging as one of key symbols of opposition politics, more voices of dissent might emerge from within the ruling party in 2022.

Barring Huzurabad, TRS did well during 2021. It retained Nagarjuna Sagar Assembly seat despite a tough fight given by senior Congress leader K. Jana Reddy. The pink party also won all 14 Legislative Council seats including the lone seat held by BJP and made a clean sweep in the elections held to seven urban local bodies.

The party crossed a milestone on April 27 as it completed 20 years of its formation. The celebrations, however, were a low-key affair due to the surge in Covid-19 cases across the state.

A major development during the year was the launch of 'Dalit Bandhu', aimed at social and economic empowerment of Scheduled Castes (SCs).

Under the scheme, claimed to be the first of its kind in the country, ever Dalit family will get Rs 10 lakh as grant and the beneficiary will be free to choose their profession, self-employment or businesses for utilising the funds.

The ambitious scheme was launched on pilot basis in Huzurabad a few weeks before by-election. The government released Rs 2,000 crore for implementing the scheme in the constituency in saturation mode, drawing criticism from the opposition that it was aimed at luring Dalit voters.

After the defeat of TRS, the government faced allegations from the opposition that it had cold shouldered the scheme. Stating that it is committed to implementation of the scheme and to counter the opposition attack, the government last week sanctioned Rs 250 crore for implementation of the scheme in four mandals or blocks, which were picked for pilot project along with Huzurabad constituency.

KCR announced that the scheme will be extended to all other Assembly constituencies where at least 100 Dalit families will be covered during the current fiscal by March 31, 2022.

He had earlier told the state Assembly that the state has nearly 18 lakh Dalit families and it requires Rs 1.80 lakh crore to implement the scheme for all Dalit families.

The chief minister also announced that Rs 20,000 crore will be allocated in the next year's budget for Dalit Bandhu. With this money, 2,000 Dalit families will be covered in each Assembly constituency.

However, it's not clear how the government will mobilise additional resources for the scheme when the state's finances were already strained due to drop in revenues under the impact of Covid-19 pandemic.

The TRS government claims to be the number one state in the country in implementing welfare schemes with an annual expenditure of Rs 40,000 crore.

The Covid-19 pandemic led to a revenue loss of Rs 50,000 crore in the previous fiscal year but the government claims that it did not allow it to affect the implementation of welfare schemes.

The launch of 'Dalit Bandhu' also led to demands from other sections of the society like backward classes and minorities for similar schemes.

"Promise to deliver Dalit Bandhu to all deserving families is the biggest social welfare challenge before KCR. There is a likely possibility, people will remain unhappy with and without implementation of this scheme. Hence, there is a high chance of this scheme backfiring," said Raghavendra Reddy.