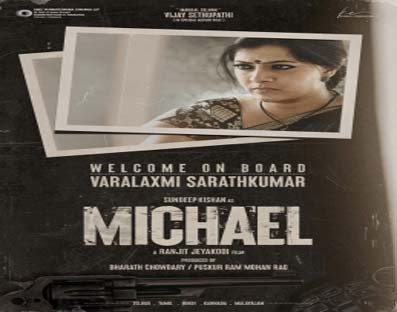 Chennai, The team of director Ranjit Jeyakodi's 'Michael', featuring actors Sandeep Kishen and Divyansha Kaushik in the lead, on Thursday announced that actress Varalaxmi Sarathkumar would be joining their unit.

The film, which is being made in Tamil, Telugu, Malayalam and Hindi, already has director Gautham Vasudev Menon and Vijay Sethupathy playing important roles in it.

On Twitter, the makers tweeted, "After the big additions of Vijay Sethupathi and Gautham Menon to Sundeep Kishan's 'Michael', the team welcomes the supremely talented Varalaxmi Sarathkumar on board. Her surprise role will set the screens on fire."

The news of actress Varalaxmi becoming a part of 'Michael' came even as the actress put out a dancing video of herself with the caption, "We are covid negative...woohooo."

'Michael' has triggered a huge amount of interest in fans and film buffs as director Ranjith had, while realising his film's title poster, written, "A wise man once said that man, by nature, is not a docile creature who prefers peace. He is a creature who is constantly expecting to be attacked and therefore ready to hit back hard!"