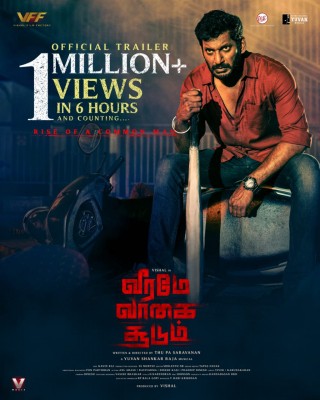 Chennai, The trailer of director Thu Pa Saravanan's action entertainer 'Veerame Vaagai Soodum', featuring Vishal and Dimple Hayathi in the lead, has garnered an impressive one million views in a matter of just six hours of being released on YouTube.

The trailer, which was released on Wednesday evening, shows Vishal as a cop who thinks out of the box. The dialogues showcased in the trailer seem to be deep. A case in point would be a dialogue that goes, "There's a lot of difference between one who kills to save oneself and another who kills others and makes a living out of it."

The trailer gives the impression that the film will provide a feast to action lovers.

Producer Dhananjayan also seemed to be impressed by the trailer. He tweeted, "Vishal's 'Veeramae Vaagai Soodum' trailer is superb with fantastic dialogues."

Over 85,000 people have liked the trailer of the film, which releases on January 26 for Republic Day.