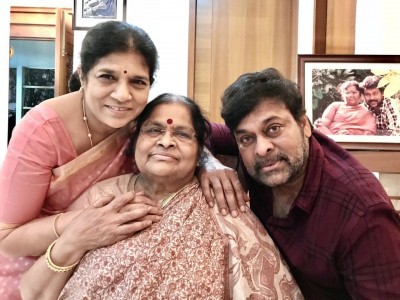 Chennai,  A tweet put out by Telugu megastar Chiranjeevi on Saturday, seeking his mother's blessings on her birthday is winning hearts on the internet.

Chiranjeevi, who is in isolation after having tested positive for Covid-19, on Saturday put out a tweet wishing his mother a very happy birthday. Pointing out that he could not take her blessings in person as he was in quarantine, the megastar in Telugu said that his prayer to God was that his mother's blessings be upon him, not just in this life but also in the next.

The heart touching tweet put out by the actor garnered a thumping 19,000 likes in a matter of just an hour-and-a-half. What's more, several of the actor's fans also took time to wish Chiranjeevi's mother a very happy birthday. It was on Republic Day this year that Chiranjeevi had announced that he had tested positive for Covid-19.

The actor, who has chosen to quarantine himself at his home after testing positive, had very mild symptoms. He had also urged everybody, who had come in contact with him over the last few days, to get tested as well.