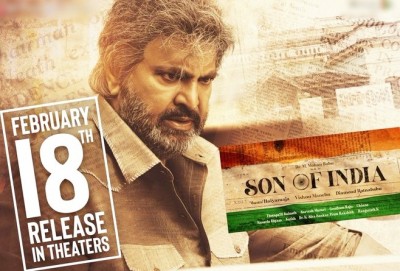 Hyderabad,  Senior actor Mohan Babu on Wednesday took to his social media handle to announce that his upcoming emotional drama 'Son Of India' is all set to hit the screens on February 18.

'Son Of India' is in the final leg of its making, while the makers are eyeing to wrap up the post-production formalities soon. Being a patriotic film, it is expected that the movie has intense emotions imbibed in it, while the dialogues are billed to be hard-hitting.

Interestingly, Mohan Babu's dear friend Tollywood star Chiranjeevi has lent his voice for the teaser, which was released a few months ago.

Mohan Babu's son, actor Vishnu Manchu, is bankrolling the venture, while Mohan Babu's daughter-in-law and Vishnu's wife Veronica have provided the costumes for Mohan Babu in this movie. While Maestro Illayaraja has composed the music, 24 Frames Factory and Sree Lakshmi Prasanna Pictures are jointly bankrolling the movie.