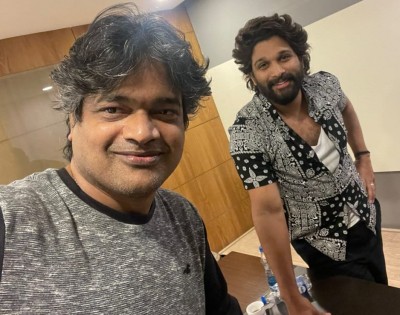 Hyderabad, Allu Arjun and Harish Shankar, the director of their hit movie, 'DJ', were spotted hanging out together. In a recent social media post, the director shared a picture of him having a good time with the 'Pushpa' and 'Ala Vaikuntapuramloo' star.

The duo strike a pose for a selfie and they seem to be enjoying each other's company. The picture has led to a speculative buzz in the industry about them coming together for a movie.

"It's always a laugh riot whenever we meet. Had a great time with you @alluarju. Until next time, love you #thaggedhele Endhuku Thaggali? Lol," Harish Shankar's tweet, which he posted with his selfie with the actor, reads. ('Endhuku Thaggali' refers to the popular 'Pushpa' dialogue in Telugu, which means 'Why should we even step back?')

This meeting is adding more weight to reports that Allu Arjun might be collaborating with Harish Shankar soon. Sources say that Harish Shankar is busy prepping for a "mass, commercial movie" for Allu Arjun.

Industry reports indicate that the movie will be the second collaboration between Allu Arjun and Harish Shankar after 'Duvvada Jagannadham' a.k.a. 'DJ'.

Allu Arjun is basking in the nationwide success of 'Pushpa: The Rise', even as he prepares to start shooting for 'Pushpa: The Rule' under Sukumar's directorial guidance.