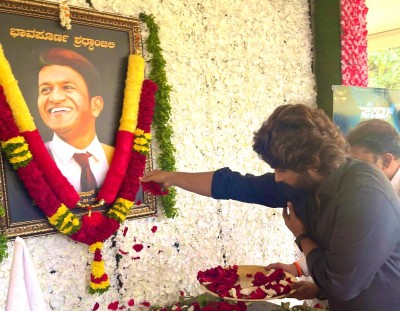 Allu Arjun spoke to members of the late actor's family, his brother Shivarajkumar and his wife. Pictures from the meeting have surfaced on social media and have going viral.

Allu Arjun took to Twitter on Thursday to pen a heartfelt tribute to the late actor. In the picture, he is shown showering flowers on the portrait of Puneeth Rajkumar. Along with it, Allu Arjun wrote: "My humble respects to Puneeth Garu. My respect to Rajkumar garu's family, friends, well-wishers and fans."

Puneeth Rajkumar succumbed to a massive cardiac arrest on October 29, 2021. He was 46 years old at the time of his sudden death, which was widely mourned across Karnataka and elsewhere in India.