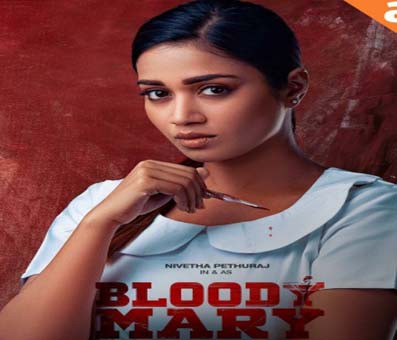 Starring Nivetha Pethuraj in the lead role, the 'Bloody Mary' trailer hints at a gripping story, which will start premiering on April 15 on Aha.

The trailer starts with an intriguing tale and voice-over, while the next glimpses create much anticipation regarding the story.

The trailer also introduces some important roles in the movie. Nivetha Pethuraj is cast as Mary, an orphan who works as a nurse in a hospital. Hinting at an investigation carried out by a cop who's trying to dig deep into a case, involving Mary and her two friends.

Rajkumar Kasireddy, Kireeti, Brahmaji, Ajay essay crucial roles in the crime suspense thriller, who can be seen in the trailer as well.

'Bloody Mary', starring Nivetha Pethuraj, marks the first time she appears in an OTT Telugu movie. Written and directed by Chandoo Mondeti of 'Karthikeya', 'Premam' and 'Savyasachi' fame, 'Bloody Mary' promises to be an intriguing story.

It is produced by the People Media Factory, while TG Vishwa Prasad is the producer and Vivek Kuchibothla is the co-producer.

Cinematographed by Karthik Ghattamaneni, the film is edited by Viplav Nyshadam. Kala Bhairava's music composition is associated with the project.