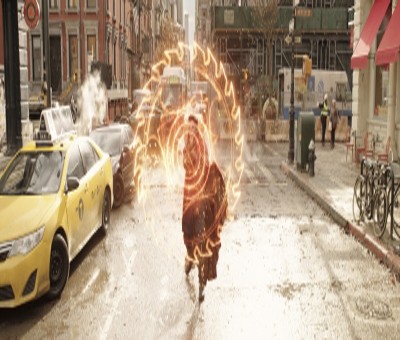 Mumbai,   Hollywood star Benedict Cumberbatch has talked about his upcoming Marvel Studios' film 'Doctor Strange in the Multiverse of Madness', he says it is such a transformational experience to be in something in the live-action vein of filming and then see the finished results on the big screen.

Cumberbatch, who plays Doctor Strange, reveals: "I think already some of the clips people have seen in the trailer spots are just exquisite.

"You've got travels through many different universes in a couple of sequences, which I think are going to be truly mind-blowing and will be a cause for a revolving-door audience. I think it's really how they're held together with a lot of real-life environment and set build."

He added: "I love how big everyone's imaginations get and how they somehow manage to ally with me as Strange, thinking about something that's 20 stories high actually being that and bearing down on him and throwing a bus at him. It's magic.

"And, on the day, Strange carving that thing in half is just a big old fan with a load of people with their hair just going all over the place. And you think, 'How is this going to work?' But you just give yourself into the moment, and to see the end product is just such a transformational experience for an actor."

"It's such a transformational experience to be in something in the live-action vein of filming and then see the finished results on the big screen."

The English star added: "You don't know what film you're in until you've sat in the theatre, watching it. It's magical, and I'm really looking forward to that buzz. But, on the day, you just throw yourself into it with imagination and a childlike sense of play and letting go of your self-consciousness because it's ridiculous what you're trying to do or achieve or pretend to do. They make it look supremely cool in the end product. So, bring it on. I can't wait to see it."

'Doctor Strange in The Multiverse of Madness' will release in theatres in English, Hindi, Tamil, Telugu, Kannada and Malayalam on May 6.