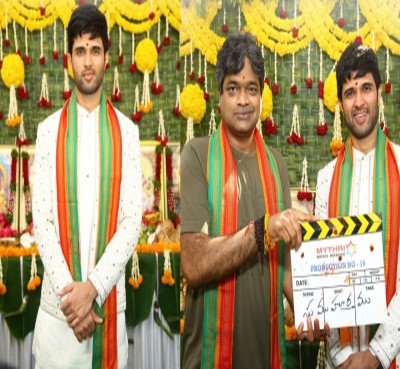 Hyderabad,  'Arjun Reddy' actor Vijay Deverakonda has signed on for an intense romantic drama, which will be directed by Shiva Nirvana of 'Ninnu Kori', 'Majili', and 'Tuck Jagadish' fame.

The movie will have Samantha Ruth Prabhu as the leading lady opposite Vijay Deverakonda.

Earlier on Thursday, the makers of the upcoming film held an official muhurat event in Hyderabad to launch the film.

The film, tentatively titled 'Khushi,' is being produced on a large scale by Mythri Movie Makers, and the first schedule is set to begin in Kashmir in a few days. After that, the team will travel to Hyderabad, Vizag, and Alleppey for the upcoming schedules.

Hesham Abdul Wahab, best known for his work on the Malayalam movie 'Hridayam', has been commissioned to compose music for this film.