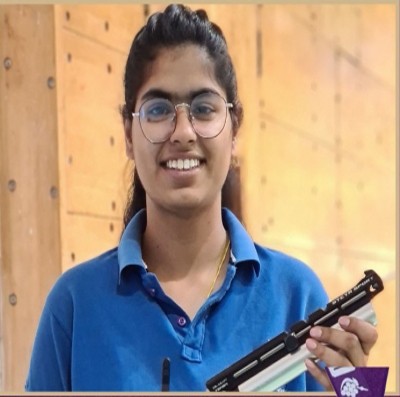 Shooting on day four of competitions in the Brazilian city of Caxias do Sul, Vedika shot 207.2 in the finals to finish behind Chinese Taipei's Kao Ya-Ju, who won silver with a score of 232. Ukraine's Inna Afonchenko won gold with final tally of 236.3 at the end of the 24-shot eight-woman final.

Dhanush Srikanth had won gold and Shourya Saini bronze in the men's 10M air rifle competition earlier on day three, to give India her first two shooting medals of the Deaflympics.

With the mixed team gold in badminton, India now has four medals from the Games and lie in eighth place on the medals table.

The final of the women's 10M air pistol saw two Indian competitors with Pranjali Dhumal, who had in-fact qualified ahead of Vedika, finishing fourth to narrowly miss out on a medal. Pranjali had topped the qualification round with a score of 561 while Vedika had grabbed the eighth and final qualifying spot with a round of 538.

In the women's 10M air rifle, two Indians again made it to the final round, however a medal eluded them. Priyesha Deshmukh finished fourth in the finals with a score of 203.4 while Natasha Joshi was seventh with 141.1. They had qualified in the exact same individual positions with scores of 618.9 and 617.6 respectively in the 60-shot qualification round.

It will be pertinent to note that the same scoring format that had been followed in the Tokyo 2020 Olympics last year in the sport is still being followed at the 24th Deaflympics 2021.

India has sent 10 Shooters in their 65-strong contingent for the Brazil Deaflympics. It is their largest and youngest ever squad and will be participating in 11 sporting disciplines.