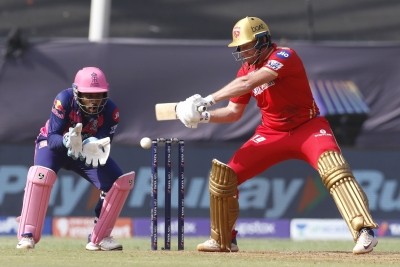 Mumbai, Jonny Bairstow scored his maiden fifty of IPL 2022 while Jitesh Sharma produced finishing fireworks to propel Punjab Kings in posting a brilliant 189/5 against Rajasthan Royals at the Wankhede Stadium on Saturday.

Bairstow made the chance of opening the batting again count with a 40-ball 56, his highest score of the tournament. Sharma, on the other hand, justified his promotion ahead of Liam Livingstone with an unbeaten 18-ball 38 and sharing a 50-run stand with the Englishman. For Rajasthan, Yuzvendra Chahal picked 3/28 while Ravichandran Ashwin and Prasidh Krishna had a wicket apiece.

Bairstow began his innings by taking two fours through leg-side off Trent Boult in the opening over. He took a special liking to uncapped speedster Kuldeep Sen, taking him for successive fours through point and mid-wicket. After bowling a maiden in his second over of the day, Bairstow and Shikhar Dhawan took 18 runs off his third over.

Dhawan got a four by dancing down the pitch to pull through backward square leg while Bairstow had a streaky four -- an edge on pull going past the keeper and ending the over with a lovely picked-up six over deep square leg. It took a stunning one-handed leaping catch from Jos Buttler at mid-on to send Dhawan back in the final over of power-play off Ashwin.

Bhanuka Rajapaksa gave Bairstow good support, welcoming Chahal with a clean six over cow corner and followed it up with another six over long-off. Bairstow showed his off-side finesse with a reverse sweep off Ashwin and cutting Sen through backward point for fours. After hitting Krishna for back-to-back fours, Rajapaksa tried to loft again against Chahal. But the leg-spinner had the last laugh by disturbing his leg-stump.

Mayank Agarwal looked set to go big with back-to-back fours off Ashwin but holed out to long-on off Chahal. Two balls later, Bairstow, who had reached his fifty with a lofted drive off Boult, was trapped lbw by the leg-spinner after missing a low flick.

Livingstone teed off with a huge six down the ground off Ashwin while Sharma crunched consecutive fours off Krishna. The duo then stole a six each off Chahal and Krishna with Livingstone taking four more off the latter.

Krishna finally had Livingstone out with a yorker hitting the base of off-stump. Sharma applied the finishing touch on Punjab's innings, smashing a six over mid-wicket followed by fours over mid-off and extra cover as 67 runs came off the last five overs.