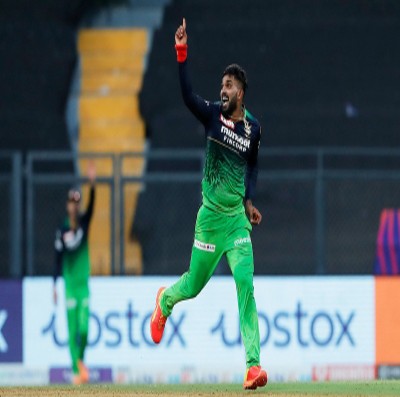 After an unbeaten 73 from Faf du Plessis and a sensational eight-ball 30 from Dinesh Karthik took Bangalore to a daunting 192/3, Hyderabad's batting order wilted under scoreboard pressure, crashing to 125 all out in 19.2 overs.

They had some solace in Rahul Tripathi's incredible 58 and some big hits from Aiden Markram and Nicholas Pooran, which didn't prove sufficient to avoid their fourth straight defeat.

Hyderabad's start of chasing 193 was an unfortunate one, losing their opening pair of Kane Williamson and Abhishek Sharma for nought in the span of first five balls. While Williamson was run-out by a direct hit from Shahbaz Ahmed with his bat on the line, Sharma was castled by a slider from Glenn Maxwell, rattling his off-stump.

Markram and Tripathi joined forces for a fifty-run partnership off 45 balls, hitting six boundaries between themselves before the former holed out to deep mid-wicket off Hasaranga.

Tripathi continued to snatch fours with some glorious shots and found company in Pooran smashing some boundaries. But Hasaranga came back to break the 38-run promising stand, taking out Pooran with a googly, taking an outer edge on an attempted slog to third man.
Tripathi brought up his fifty in style with a superb inside-out lofted six over extra cover off Mohammed Siraj and earned a reprieve when Hasaranga put down a sitter at deep backward point.

But the leg-spinner came back to have Jagadeesha Suchith stumped and when Tripathi pulled straight to deep square leg off Josh Hazlewood, the result was a foregone conclusion. Hazlewood, Hasaranga and Harshal Patel took out the remaining batters to register a thumping win for Bangalore.