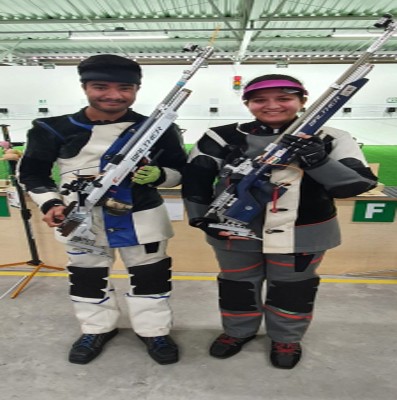 New Delhi, Dhanush Srikanth teamed up with Priyesha Deshmukh to win gold in the 10m air rifle mixed team competition at the 24th Deaflympics 2021 in Caxais do Sul, Brazil.

Shooting on competition day six on Saturday, Dhanush and Priyesha beat Germany's Sebastian Herrmany and Sabrina Eckert 16-10 in the gold-medal match. This was Dhanush's second gold of the games after having won the men's 10m air rifle individual title.

India also have two bronze through Shourya Saini in men's 10m air rifle and Vedika Sharma in women's 10m air pistol, for a total of five medals from shooting.

Shourya and Natasha Joshi, the second Indian pair in the 10m air rifle mixed team competition, also made it to the bronze-medal match, but went down 8-16 to the Ukrainian pair of Oleksandr Kostyk and Violeta Lykova.

Dhanush and Priyesha were in their elements from the qualification round itself, where they topped the eight-team field with a combined effort of 414.0 to ensure a shot at gold. The Germans who followed them to the title round were a distant second with 408.7.

Shourya and Natasha finished third with 407.4 but the fourth finishing Ukrainian pair turned the tables on them in the medal round.

India has sent 10 shooters in their 65-member contingent for the Brazil Deaflympics.