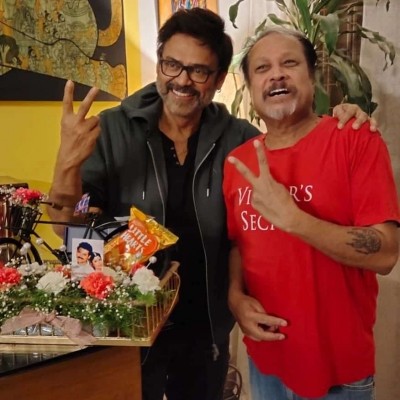 Hyderabad,  'Preminchukundaam Raa', directed by Jayanth C Paranjee and released in 1997, was not only one of the year's biggest box office hits but also a milestone in Venkatesh Daggubati's career.

The movie team recently celebrated the 25th anniversary of this film in a spectacular way. Jayanth C Paranji posted videos of the meet on Instagram with the caption "Reunion Madness At Home."

Venkatesh is seen in the video enjoying the party alongside Jayanth, Babu Mohan, V.N. Aditya, and a few other movie stars.

While this is the first time a Telugu movie team has celebrated a reunion, one of the major highlights is that the team had a theme party to relive memories from 'Preminchukundaam Raa.'

The film, which starred Venkatesh and Anjala Zaveri, was praised for its youthful love story, performances, and memorable songs, all of which contributed to the film's positive critical reception.

One of the film's highlights is Jayanth's narration. It was the first Telugu film to run for 100 days in more than 50 locations, with 50 days in 57 locations.

On the other hand, Venkatesh will be seen in Anil Ravipudi's ready-to-release movie 'F3'.