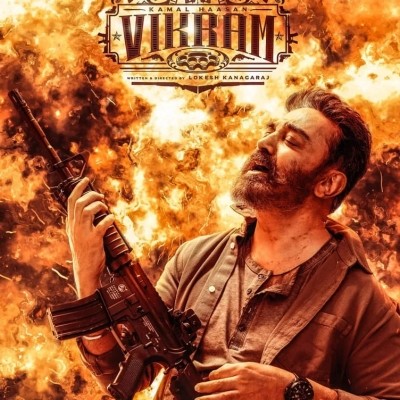 Chennai, The build-up for the Kamal Haasan-starrer 'Vikram', where the superstar is essaying the role of a police officer, pitted against Vijay Sethupati playing the villain, will start on Sunday, May 15, the day marked out for the film's audio release featuring the music of the redoubtable Anirudh Ravichander.

Movie buffs consider 'Vikram', which is being directed by Lokesh Kanagaraj, to be the next moment for the Tamil movie industry. The film is being released on June 3, which is also the opening date of the much-anticipated 'Major', the biopic of the 26/11 braveheart, Major Sandeep Unnikrishnan, and the Akshay Kumar-starrer 'Prithviraj'.

The May 15 audio release of the movie that was slated to be held in Dubai is now shifted to Chennai and will be held at the Jawaharlal Nehru Indoor Stadium, Chennai. The movie will also have Kamal Haasan playing his younger version in a sequence.

The trailer of 'Vikram' will also be shown during the audio release and is expected to be a star-studded event with the possibility of superstar Rajanikanth and other big names in Tamil films participating in the event.

The music of the movie is scored by Anirudh Ravichander and the extensive promotions will commence with the May 15 audio launch.