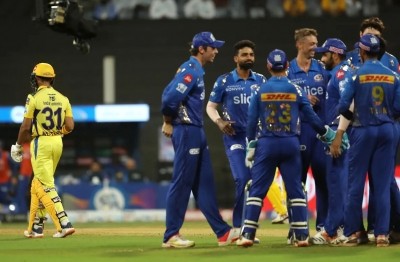 Mumbai,  Abject poor batting by Chennai Super Kings batters against a superlative bowling effort by the out-of-contention Mumbai Indians saw CSK being bowled out for 97 in 16 overs in Match 59 of the IPL 2022 at the Wankhede Stadium here on Thursday.

Choosing to bowl first, the Mumbai Indians pacers started well, bowled good line and length and used the conditions well. The ball was swinging even in the 8th over but there were no demons in the pitch. CSK were unlucky as they could not use the DRS in the first few overs due to some technical issues -- during which Devon Conway was hard done by a dodgy decision that he could not review, but their batters too made things easy for Mumbai Indians by playing some unnecessary shots.

Opening the bowling, Daniel Sams claimed 3/16 while Riley Meredith (2/27) and Kumar Kartikeya (2/22) kept up the pressure as CSK struggled to recover from the early blows and ended with a paltry score.

CSK skipper M.S Dhoni waged a lone battle as he remained not out with 36 runs, hitting four boundaries and two sixes. He and Dwayne Bravo raised 39 runs for the seventh wicket before the West Indies allrounder was caught brilliantly by Tilak Varma at short cover. But that was too little and too late as Chennai's slim hopes of making it to the play hang by a wafer-thin thread.

Chennai Super Kings got off to a horrible start as they ended the powerplay at 32/5.

Devon Conway was the first to go, given out lbw off Daniel Sams to the second delivery of the first over that looked going down the leg-side to naked eye. With DRS unavailable due to "technical reasons", Conway had to trudge back to the stadium without reviewing the decision.

Two deliveries later, Moeen Ali (0) joined him in the dugout, caught in double mind on whether to play a pull short or pull his bat away to a short one by Sams. By the time he decided and tried to withdraw, the ball had already taken the top edge which flew to Hrithik Shokeen for a simple catch, CSK were 2/2 after the first over.

Robin Uthappa (1) did not last long, trying to flick across the line to a length ball by Jasprit Bumrah and rapped on the front pad. No DRS for him too. Ruturaj Gaikwad (7), who had watched the carnage from the other end, edged one down the leg-side and was caught by the keeper.

Ambati Rayudu (10) survived for 14 deliveries, struck two fours -- one off Bumrah, gliding a length ball on off past the short third-man, and the second off Riley Meredith with a superb backfoot square drive. He was out off the next delivery, caught behind as he tried to defend against a superb delivery but could manage only an inside edge to Ishan Kishan and CSK were reeling at 29/5 in the sixth over.

Shivam Dube, who has rescued CSK with some good batting down the order in couple of matches, struck Meredith for a four with a fine pull shot but the bowler had the last laugh as Dube edged the next ball, a short one on the middle stump to Ishan Kishan and the keeper took a superb catch to add to CSK's woes. CSK were 39/6 and staring down the barrel.

The CSK batters had themselves to blame as their shot-selection was not up to the mark. Mumbai Indians did bowl some good lengths and lines and used the short ball well, it was not the only reason.

Skipper M.S Dhoni and Dwayne Bravo added 39 runs for the seventh wicket partnership but could not pull CSK out the trouble totally as Bravo fell to a well planned strategy by Mumbai Indians. Tilak Varma was at short cover and he plucked a brilliant one-handed catch as Bravo drove a low full toss by Kumar Kartikeya Singh. CSK were down to 78/7 and clearly out of depth. It was a lucky break for Mumbai Indians as such catches just stick to raised hand but Varma was quite brave to put his hand out to a ball that was flying like a bullet.

The rest of the batters did not last long -- Simranjeet Singh (2) and Maheesh Theekshana (0) was out tamely and Mukesh Chaudhary struck a four before getting run out, going for a premeditated run off the last delivery of the 16th over.