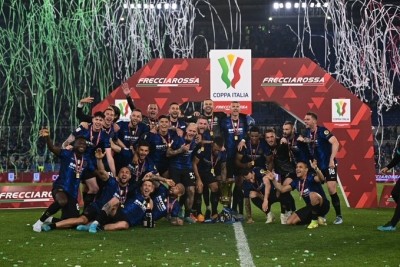 Rome, Inter Milan won its eighth Coppa Italia title and the first since 2011, after beating Juventus 4-2 in the final in extra time at the Stadio Olimpico here on Wednesday.

Inter has a superior head-to-head performance over Juve this season, as it managed two wins and one draw in the Serie A and Supercoppa against its archrival. The Bianconeri needed a win to avoid finishing the season without a trophy, while the Nerazzurri is still fighting for a domestic treble.

Inter took the lead just seven minutes into the game when Nicolo Barella cut inside from the left to unleash a missile with both power and precision.
Juve turned the game around just two minutes after the break with Alex Sandro's equalizer and Dusan Vlahovic's follow-up, reports Xinhua.

Lautaro Martinez won a penalty for Inter in the 79th minute as Hakan Calhanoglu stepped up to convert it, dragging the game into extra time.

Inter ran riots after that as it restored the lead with Ivan Perisic's spot-kick before the Croatian smashed in a blockbuster to seal the win.

Conflicts were sparked later on the sideline between Juve's coach Massimiliano Allegri and Inter's coaching staff, which ended up with Allegri's red card.

"I have the honor of sharing this journey with the team, the staff and everyone who works behind the scenes on a daily basis," said Zhang Kangyang, president of Inter Milan.

"This trophy is another piece of Inter's history, but our season doesn't finish here. We must keep fighting to the very last minute," he added.