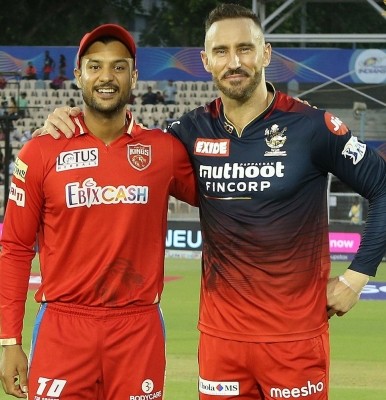 Mumbai, Royal Challengers Bangalore skipper Faf du Plessis won the toss and elected to bowl first against Punjab Kings in Match 60 of IPL 2022 at the Brabourne Stadium here on Friday.

Du Plessis said he chose to bowl first because that has become the trend in IPL 2022.

"We'll have a bowl. The trends in the competition suggest that the wickets are getting better, toss isn't making much of a difference. One side is a bit short (boundary), so that's a factor. We played some good all-round cricket in the last few games, hopefully, everyone can play their role perfectly today as well. Looks like a good wicket, just unsure how it will play early on, so just want to have a bowl," he said at the toss.

RCB are going into the match with an unchanged playing XI.

"Not a bad toss to lose. Want to put runs on the board and put pressure on them. Obviously, runs on the board is a factor. We have been playing good cricket but it's been a bit on and off. Need to do that as a team (for longer periods)," said Agarwal.

Punjab Kings made one change in their side, Harpreet Brar coming in for Sandeep Sharma.

"Left-arm spinner against them is a good matchup, so that's why we have made the change," said Agarwal.