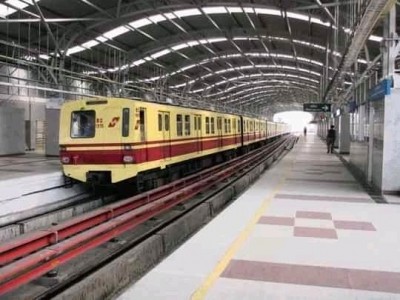 Kolkata, Kolkata Metro Railways Corporation Limited (KMRCL), the implementing agency of the Kolkata East-West Metro project, is apprehending a fresh round of cost overrun as the completion of the project will be delayed further by about a year because of fresh cracks in many houses at Bowbazar in central Kolkata due to the metro's underground tunnel boring work.

The project, which will connect Howrah Station with the IT hub at Sector-V in Salt Lake, was estimated to be completed by January 2023. However, following the fresh cracks in several houses at Durga Pituri Lane in congested Bowbazar area in central Kolkata, the project completion will be delayed by another eight to nine months, according to KMRCL managing director Chandranath Jha.

He said that the delay will be because of the repair and better maintenance of the underground tunnel. There has been a mishap and hence the timeline of completion needs to be extended, said Jha.

KMRCL sources said that this time overrun will definitely mean another round of cost overrun. "The exact cost overrun cannot be determined now, since it will depend on the final time of actual completion of the project and additional repair and maintenance work that needs to be done specially the vulnerable points that the underground tunnel will pass through. And if by chance if there is necessity or compulsion in making modifications in the tunnel route, then the cost overrun will be more," said an official of KMRCL on condition of anonymity.

If that happens, this will be the second time that the project will face a cost overrun. Already it had faced a massive cost overrun because of the change of tunnel route.

The first change in the tunnel route plan was brought in 2014, which resulted in an extension of the route by 1.87 kilometres. Hence the project cost escalated from the initial estimate of Rs 4,874 crore to Rs 8,996 crore, resulting in a cost escalation of Rs 4,122 crore.

Accordingly, the loan assistance for the project from Japan International Cooperation Agency (JICA) also increased. It has been learnt that initially both KMRCL and JICA were against this tunnel route change keeping the cost overrun in mind. However, ultimately the route change happened.