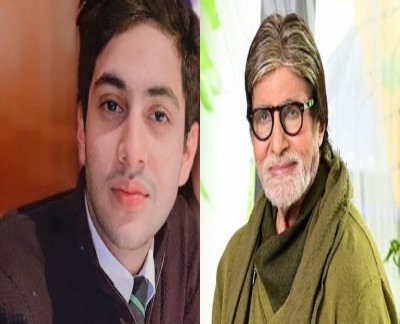 Mumbai, As the cast reveal of the Zoya Akhtar directorial 'The Archies' gained momentum through the day, Bollywood megastar Amitabh Bachchan expressed his happiness on his grandson Agastya Nanda being a part of the highly anticipated project, on Saturday.

The legendary star took to his Instagram to share the film's poster featuring the starcast. Doing a quirky wordplay, an excited Amitabh wrote in the caption, "another SONrise .. my GrandSON .. all the blessings Agastya .. love you (heart emoji). Get ready to take a trip down memory lane 'cause The Archies by @zoieakhtar is coming soon only on @netflix_in (sic)."

Abhishek Bachchan took to the comments section to drop a heart emoji. Agastya is the son of Amitabh's daughter, Shweta Bachchan Nanda - a columnist and author, and Nikhil Nanda, who is the chairman and managing director of the engineering company, Escorts Limited.

The film is due for a 2023 release on streaming platform Netflix.