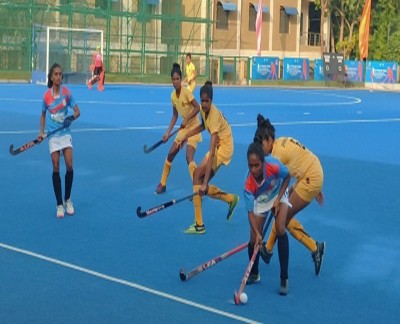 The first game of the day saw Hockey Maharashtra competing against Hockey Jharkhand. Both the teams put up a spectacular defensive performance in the match. Neither of the two teams was able to get a goal in regulation time and the match was pushed to a Shootout. In the Shootout, Betan Dungdung, and Reshma Soreng converted twice while Nirali Kujur scored once as Hockey Jharkhand beat Hockey Maharashtra 0-0 (5-4 SO) to reach the semifinals. For Hockey Maharashtra, Akansha Singh scored twice in the Shootout, while Ankita Sapate and Manashri Narendra Shedage scored once.

In the second quarterfinal match of the day, Hockey Haryana beat Uttar Pradesh Hockey 0-0 (3-2 SO) after a thrilling contest. Both the teams created plenty of chances in the match to get a goal and take the lead. But neither of the two teams was able to score a goal in the regulation time and the match was pushed to Shootout. In the Shootout, Ekta Kaushik, Bharti Saroha and Priyanka scored for Hockey Haryana, while only Sonal Tiwari and Simran Singh could score for Uttar Pradesh Hockey.