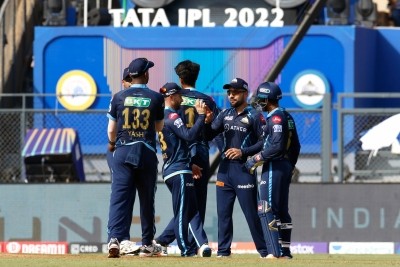 Mumbai, Gujarat Titans' bowlers put up a fine all-round show to choke Chennai Super Kings, especially by not conceding a boundary in the death overs, before Wriddhiman Saha starred with an unbeaten 67 to complete a comfortable seven-wicket win in match 62 of IPL 2022 at the Wankhede Stadium on Sunday.

After Gujarat restricted Chennai to a below-par 133/5 despite a 49-ball 53 from Ruturaj Gaikwad, Saha carried his bat through the innings to help them chase down the total with five balls to spare. The result also means that Gujarat have confirmed their spot in the top two of the points table, which means they will get to play in Qualifier 1 at Kolkata on May 24.

Saha got Gujarat off to a brisk start in pursuit of 134, taking three boundaries off Mukesh Choudhary in the opening over, two of them coming through an inner edge past stumps and top-edge over the keeper. In Choudhary's next over, Saha was dropped on 21 by Gaikwad at point amidst the right-hander collecting two boundaries.

From there onwards, it was no looking back for Saha, pulling Simarjeet Singh over deep mid-wicket for six in the fifth over followed by thumping one over the bowler's head for a boundary. Saha's fast and furious start allowed Shubman Gill to take his time and bring out the pull as well as sweep to take boundaries off Mitchell Santner.

But Matheesha Pathirana, the pacer with an uncanny resemblance to countryman Lasith Malinga's sling-arm bowling action, bagged his maiden IPL wicket by trapping Gill lbw with a full, pacy delivery which hit him low on the pad as the right-hander attempted to flick. Gill reviewed but was unable to overturn the decision, ending the 59-run opening partnership.

Matthew Wade got going with a brace of boundaries off Pathirana but fell while trying to loft against Moeen Ali in the 12th over and mistimed to long-on. Two overs later, Pathirana got his second wicket when his off-cutter took the leading edge off Hardik Pandya's attempted flick and was caught by mid-on.

Saha, meanwhile, hung around to reach his third fifty of the tournament in 42 balls and shared an unbeaten 37-run stand with David Miller to take Gujarat past the finishing line. Fittingly, it was Saha who hit the winning runs - guiding one past short third man off Pathirana to give Gujarat their tenth win of the tournament out of 13 matches.

Earlier, Gaikwad began really well for his 49-ball 53 but gradually slowed down as the innings progressed. He found an ally in Moeen Ali but Chennai never found the acceleration and big runs they needed, faltering badly in the last five overs as the batters couldn't hit a single boundary in that phase.

For Gujarat, Mohammed Shami was the pick of bowlers for 2/19 while Rashid Khan, Alzarri Joseph, and R Sai Kishore picked a wicket each in a tidy bowling show. Pushed into bowling first, Shami got the breakthrough when he found the outside edge of Devon Conway's bat on a ball straightening and giving a straightforward catch to Saha.

But Chennai made a good recovery in power-play as Gaikwad and Ali took 32 runs off the last two overs of power-play. While Gaikwad smacked two boundaries and a six off Yash Dayal in the fifth over, Ali hit Rashid for back-to-back sixes over leg-side. Gaikwad and Ali shared a stand of 57 runs off 39 balls before left-arm spinner Kishore took out the latter, who played one shot too many and mistimed a slog-sweep to deep mid-wicket.

Though Gaikwad continued to motor along, he wasn't getting the required big hits from N Jagadeesan. After Gaikwad reached his fifty off 44 balls, Jagadeesan smacked a four and six off Kishore to boost the scoring rate going into the last five overs. But Gujarat triggered a slowdown from which Chennai could never recover.

Gaikwad danced down the pitch to heave across the line but was caught at deep mid-wicket off Rashid. Joseph bounced out Shivam Dube for a two-ball duck while Shami returned in the final over to take out M.S Dhoni with a short ball pulled straight to mid-wi'ket. Such was Gujarat's strong control over Chennai in the last fiv' overs that they didn't leak a single boundary while giving away 24 runs.