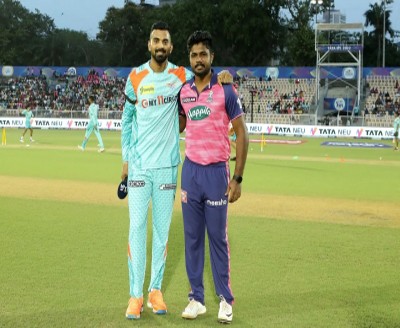 Mumbai,  Rajasthan Royals won the toss and elected to bat first against Lucknow Super Giants in Match 63 of IPL 2022 at the Brabourne Stadium here on Sunday.

Sanju Samson, the captain of Rajasthan, said they want to bat as that has been their strength. "We want to bat. That's been our strength throughout the tournament. It's important to keep a balanced state of mind.

Rajasthan made two changes in their playing XI for this match, Jimmy Neesham and Obed McCoy coming for Rassie Van Der Duusen and Kuldeep Sen respectively.

Lucknow Super Giants skipper KL Rahul said he would have bowled first if he had won the toss. "I wanted to bowl first. Looks like a nice wicket," he said, adding that they did not bat well in the last couple of games and want to learn from that. "You don't want to run away from it, you want to learn from mistakes like that. We need to turn up every game, we had that chat and everyone agreed that a game like that can happen," he said.

LSG made one change, bringing in Ravi Bishnoi for Karan Sharma.