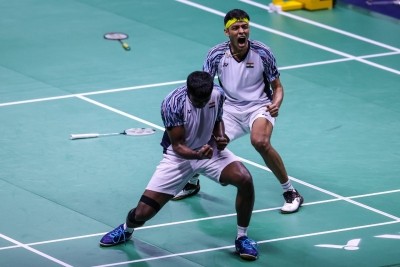 India scripted history with a dominant 3-0 victory over 14-time winners Indonesia in their maiden entry into the Thomas Cup final, becoming only the sixth nation to win the title in the seven-decade history of the tournament.

"The Indian badminton team has scripted history! The entire nation is elated by India winning the Thomas Cup! Congratulations to our accomplished team and best wishes to them for their future endeavours. This win will motivate so many upcoming sportspersons," PM Modi said in a tweet on Thursday.

Anurag Thakur was quick to announce a cash award of Rs 1 crore for the team.

"HISTORY CREATED ! Congratulations to the Indian men's badminton team for winning the Thomas Cup! This extraordinary feat, with successive victories over Malaysia, Denmark and Indonesia, calls for matching honour by the nation," Thakur said in his tweet celebrating India's brilliant win.

Bindra led the sportspersons in hailing the team, calling it an incredible achievement.

"What a historic day! An incredible achievement by an incredible Team India to win the #ThomasCup for the first time ever!! Bounced back from tough situations on numerous occasions to win Gold. Kudos to all the players and coaches. Champions, all of you!," said Bindra in his tweet.

Former Women's No 1 Saina Nehwal termed it a great win, tagging Kidambi Srikanth, Lakshya Sen and the doubles pair of Satwiksairaj Rankireddy and Chirag Shetty in her tweet.

Former India hockey captain Viren Rasquinha noted the transformation in Indian badminton in the last couple of decades as he congratulated the team on its historic win.

"When I played the Olympics at Athens 2004, India had 1 player in the men's badminton draw who lost very early. Today we are Thomas Cup Champions in 2022. What depth in Indian badminton. What a transformation. Winning mentality," said Rasquinha.