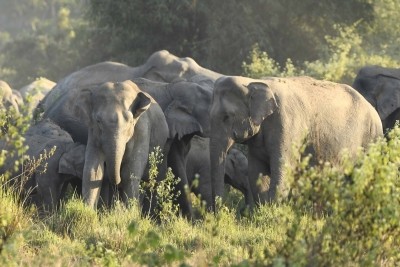 Sanjay Singh, Uttar Pradesh's chief wildlife warden, said, "The two elephants were seized by the department officials from private keepers who did not have valid permission with them. One of them is a 20-year-old bull elephant which has been living in Phulpur forest nursery at Prayagraj for a year, while the second is a 50-year-old cow elephant in Jaunpur district. These two pachyderms are also being provided to Pilibhit Tiger Reserve."

The Pilibhit Tiger Reserve authorities had sought 10 elephants in 2018 as part of "Project Tiger".

This was reduced to six by the Karnataka authorities in December 2021.

Now with two elephants from Prayagraj and Jaunpur, only four pachyderms will be taken from Karnataka.

Naveen Khandelwal, Divisional Forest Officer of Pilibhit Tiger Reserve, said, "The "no-objection" certificates from the Andhra Pradesh, Telangana, Maharashtra and Madhya Pradesh governments through which the elephants will pass have been obtained. We are now waiting for the early monsoon to let the high atmospheric temperature dip. We have been issued certain guidelines for taking proper medical care of pachyderms during the transit period, which we will strictly follow."

A five-member team comprising a Sub-Divisional Forest Officer, a Range Officer, one Departmental Veterinary Officer and two other Forest personnel has been constituted for fetching the elephants.

In addition, six mahouts arranged from Dudhwa Tiger Reserve will also be leaving for Karnataka a week before the departure of the five-member team, Khandelwal added.