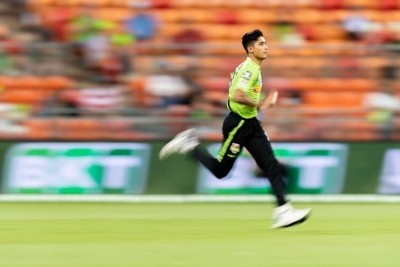 Karachi, Pakistan's pacer Mohammad Hasnain has been cleared to bowl in international cricket following an independent reassessment at the ICC accredited centre in Lahore, Pakistan Cricket Board (PCB) said in a statement on Thursday.

Hasnain was reported for a suspect action during a stint with the Sydney Thunder in Australia's Big Bash Twenty20 league last season and suspended from bowling after biomechanical testing confirmed his action was illegal.

The board made the announcement on Thursday, stating that the amount of elbow extension in the reassessment was within the 15-degree level of tolerance permitted under the ICC Illegal Bowling Regulations.

"As such, he can now resume bowling in all forms of cricket, which includes domestic cricket worldwide," read the statement.

After considering sending Hasnain to an independent consultant, the PCB decided to assign its high-performance coach, Umar Rasheed, to work with him at Lahore's High-Performance Centre. His tests took place at Lahore University of Management Sciences, an ICC-accredited testing laboratory on January 21. The test report, which was reviewed and verified by Cricket Australia's independent expert, found his bowling action to be illegal, ESPNCricinfo said in a report.